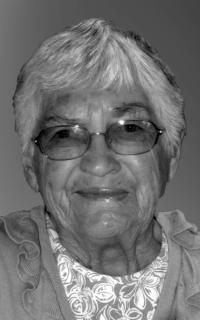 October 11, 1927- February 15, 2015
On Sunday, February 15, 2015, our beautiful, sweet mother and friend slipped away peacefully in her home. Irene was born to Harry and Anne Strynadka in Willingdon, Alberta, on October 11, 1927. An honours student throughout school, she dreamed of becoming a nurse. Her dream became a reality when she returned to school at the age of 48. She became a compassionate practical nurse who loved her career until she retired at age 63. On July 26, 1947, at age 19, Irene, \”the prettiest girl in Willingdon\”, married John Krulak, the handsome new schoolteacher in town. Their adventure in life together followed his teaching career in Alberta and British Columbia, finally settling in Lethbridge. Along the way, she created a warm and loving home where they raised four daughters: Patricia Elaine, Adeline Mae, Janice Irene, and Carolyne Anne. Irene and her husband lived an acreage lifestyle with many adored family pets. They enjoyed camping, travelling, and spending time with family and friends. Irene was a fabulous cook: she made the world\’s best cinnamon buns, perogies, and traditional Ukrainian Christmas Eve dinners. She was also an avid Scrabble player, an amazing gardener, and she had a great love of the outdoors. Irene and John retired to a scenic home in Vernon, B.C., later returning to Calgary to be closer to family. Irene\’s kindness, generosity, and affectionate nature will always be remembered. Irene says goodbye to all her loved ones, including her special Calgary friends and new friends in Lethbridge at Garden View Lodge and Cedar Creek Assisted Living. Irene will be deeply missed by her daughters: Pat (Richard) Cooper, Abby (Charlie) Burton, Janice Taylor, Carrie (John) Corbett; her seven grandchildren: Diana, Natalie, Stephanie, Rachel, Nicole, Emerson, Evan; and her five great-grandchildren: Kaitlin, Emma, Finley, Callie, Senna. A Celebration of Irene\’s Life will be held on Saturday, April 11, 2015 at 11:00 a.m. at Eden Brook Memorial Gardens (17th Avenue S.W. and Lower Springbank Rd. Calgary, AB).