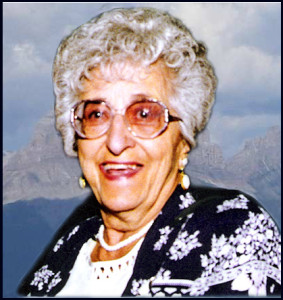 Annie “Anne” Spatuk (nee Kanik) passed quietly at the Crowsnest Health Care Centre on March 27, 2015. She was a loving and generous wife, mother, sister, grandmother and great grandmother; a passionate educator, supporter of the arts, dedicated historian, and vocal activist. After many years of teaching and active involvement in the community, she has established a strong legacy that few can match. Her family is very proud of her and all her accomplishments but mostly for her determination to do the right thing and give generously of her time, expertise and love. She is survived by daughters Marianne Blythe of Whitehorse, YK and Susan (Kenneth) Swenson of Victoria, BC. Her grandchildren, Kate (Shane) Petry of Lethbridge, Brooke (Rene) Bryzgorni of Sexsmith, Ian (Brandie) Spatuk, Corrie (Peter) Bubik and Nicolas (Sherri) Spatuk all of Blairmore, and Natasha Puka and Tanya (Joe) Puka of Calgary; and her sisters, Mary Flexhaug of Alix and Florence McQuarrie of Blaimore. Anne was blessed with 11 great grandbabies, numerous nieces, nephews and her extended family and many friends. The Prayer Service will be held on Tuesday, March 31, 2015 at 8:00 pm at the Holy Trinity Roman Catholic Church in Blairmore (13126-21 Ave) with Deacon Renso Castellarin officiating. The Memorial Mass will be held on Wednesday, April 1, 2015 at 11:00 am at the Holy Trinity Roman Catholic Church with Fr. Ben Marino as Celebrant.

Condolences may be registered at www.fantinsfuneralchapel.ca. Fantin’s Funeral Chapel entrusted with arrangements. (403) 562-8555.

One Condolence for “SPATUK Anne”