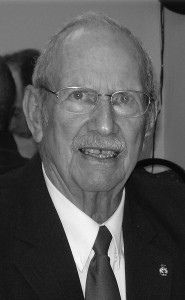 It is with great sorrow that we announce the passing of Ed, beloved husband, father and grandfather. He passed away at home in Coaldale on Tuesday, April 7, 2015 at the age of 84 years. He was predeceased by son Larry, sisters Jeanette, Jean Rail, Gladys Briand and brother Normand. He is survived by loving wife Vera (Pratt) Paquin, daughters Shelagh and Maureen and grandson Nikolas, sisters Lilian McManus, Marguerite McMillan, Lorraine (Wayne) Punkari, many nieces, nephews, great nieces and great nephews. Ed joined the Royal Canadian Air Force in 1954 and was stationed in Claresholm where he met and married Vera in 1958. After various postings in Canada and France he retired from the military in 1974 in Comox, BC. He then became an industrial first aid attendant working in logging camps, primarily with Canadian Forest Products until he retired in 1984. Ed and Vera returned to Southern Alberta in 1999, settling first in Nobleford, and Lethbridge before moving to Coaldale in 2013. A viewing will be held on Friday, April 10, 2015 at CHRISTENSEN SALMON GENERATIONS FUNERAL HOME, 703-13 Street North, Lethbridge at 7:00 p.m. The Funeral Service will be held at CHRISTENSEN SALMON GENERATIONS FUNERAL HOME on Saturday, April 11, 2015 at 1:30 p.m. Interment in the Coaldale Cemetery.

One Condolence for “PAQUIN Edward”