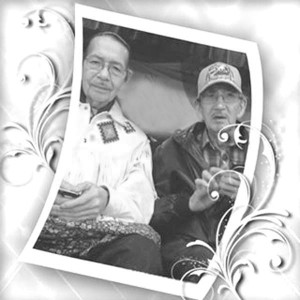 It is with great sadness that we announce the sudden passing of our Dad, Addison Crow Spreads His Wings (Punisayee) who now joins our Mother in Heaven.

Addison was born on May,14,1954 in Cardston, Alberta and died peacefully on April,3, 2015 on the Blood Reserve. He was a Great Man who actively pursued his passion in First Nations Rights, Governance and Grassroots Movement. Addison received his Education at The St. Mary’s Residential School, SAIT & University of Calgary. He also studied and Practised the traditional teachings of the Blackfoot Culture. He was a Pipeholder & Healer.

He was predeceased by his parents Joseph Crow Spreads His Wings and Elaine Small Face; sisters Delores Crow, Patricia Small Face; brothers Claude & Adrian; adopted family members; numerous nieces & nephews. Thank you to all the Family members – Kootenay, Firstcharger, Crowchief, Chief Calf, Eagle Speaker, Healy, Dixon, Manybears, Many Fingers, Beebe, Wells, Cross Child, Davis, Smallface, Blackwater, Big Plume, Weaslefat, Tallow. Our apologies if we have missed anyone. He was a very intelligent & well respected Man and will be greatly missed. “Many are called but few are chosen”. He was the chosen one!!

We sadly announce the passing of Joseph Claude Crow Spreads His Wings (Mewbii), born on August 3rd, 1948, in Lethbridge on April 5th, 2015 at the age of 66 years.

Claude was a humble man, loving father, great brother and also great friend. He was born in Cardston, AB. He was raised on the Blood Reserve, attended St, Mary’s residential school, after which he helped his father. He became a mechanic, helped his father farm the land, and with his father’s tutorship became one of the most advanced carpenters. This was followed by many achievements and successes. He was call on for his professional abilities for many buildings on several reserves. He took pride in his ability to help people young and old during their time of need.

The Crow family would like to apologize if they have missed anyone.

E-mail your condolences to: legacycardston@gmail.com