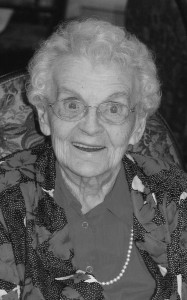 Dora was born and educated in Lethbridge. After high school she took a commercial course and obtained a job as a secretary- receptionist for the optical firm Wilkins & Nuttall. After a three year courtship, she married Bernard (Bub) Nolan on April 23, 1943 and they raised their family in the Picture Butte area. Dora was very involved in church and leadership in her community. In their earlier years, Dora and Bernard enjoyed dancing, camping, which continued into their retirement years, travelling throughout North America and parts of Europe.

Family and friends are invited to pay their final respects between 6:00pm and 8:00pm on Thursday, April 16, 2015 at MARTIN BROTHERS RIVERVIEW CHAPEL, 610 4 Street South, Lethbridge.

Flowers are gratefully declined. Those who wish, memorial donations may be made to Muscular Dystrophy Canada, 2345 Yonge Street, Suite 900, Toronto, Ontario M4P 2E5.