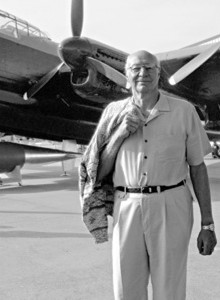 JOHN “JACK” REYNAR, beloved husband of Ruth Reynar, passed away in Lethbridge on Tuesday, May 12, 2015 at the age of 92 years. Dr. John (Jack) Reynar was born on January 10, 1923 at the Bow Island Hospital. He married Ruth Edeen in 1951. Together they had two daughters Karin Lee and Marlys Joan. Dr. Jack (as he was called by many) was predeceased by parents T. Alfred and Violet (James) Reynar, daughter Karen Lee, and sister Joan (Reynar) and brother-in-law Cecil Grist. He is survived by his wife Ruth, daughter Marlys and brother Donald and sister-in-law Dorothy (Krause) Reynar. His very special animal friend Sasha also survives him. Dr. Jack grew up in Foremost and continued his education until he joined the Royal Canadian Air Force in 1942. He trained as a navigator and flew Lancaster bombers in the Royal Air Force with a mixed crew of Australians and British. He successfully completed 30 missions before being repatriated in 1945. In September 1945 at the age of 22, Dr. Jack started medical school in Edmonton at the University of Alberta. Upon graduation, he practiced in Edson, Alberta before opening his practice in Brooks. Dr. Jack worked as a General Practitioner before returning to medical school to complete his specialty in Pediatrics. In 1974, Dr. Jack and Ruth moved to Lethbridge where he started working for the Alberta Mental Health Board. He practiced there until 1987 when he retired from full-time work. Dr. Jack continued to be involved in medical practice for many years finally retiring completely at the age of 88 after serving on the Alberta Mental Health Review Panel. Dr. Jack was community spirited, serving on the Brooks School Board, the University of Lethbridge Senate and for many years was an active member of the Lethbridge Rotary club. He was instrumental in getting the first dragon boat for the A Breast of ‘Bridge Dragon Boat Team which eventually led to the Lethbridge Dragon Boat Festival. He was a compassionate man going to Africa in the 1960s to provide medical care in rural Tanzania. He went above and beyond with the children he saw in Mental Health by providing them with things like books and bikes that they could not afford. Dr. Jack started being physically active at an early age—playing semi-pro baseball as a youth and continuing with biking, squash, racquetball, skiing, skating and slow pitch as an adult; he last skied at the age of 79. He also took in a few ski and bike trips in Austria. Dr. Jack and Ruth were great travelers, going to over 50 countries culminating with a month long round-the-world trip in 2004. Dr. Jack expressed his creativity in his metal sculpture artistry and particularly enjoyed depicting bible stories and war scenes. He enjoyed philosophizing about life, politics and the state of the world and generally could be counted on to express an opinion on all! Dr. Jack will be sorely missed by his family, many friends and his little dog. God speed. A memorial gathering will be held on Saturday for family and friends. In lieu of flowers, please send donations to the Lethbridge and District Humane Society, 2920-16 Avenue North, Lethbridge, AB T1H 5E9.