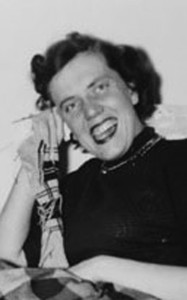 Eunice Clara Vinge Dravland, devoted wife of the late Vernon Dravland passed away peacefully at Fairmont Extendicare in Lethbridge on January 3, 2016 at the age of 88 years.

She is survived by her daughter Elsa (Stephen) Mickelsen of Encinitas, California, and Eric (Susan) Dravland of Lenoir, North Carolina, as well as ten grandchildren and five great-grandchildren, and numerous cousins, nieces, and nephews. She is also survived by her brother Donald Vinge of Edmonton and Doreen Nostbakken of Saskatoon.

She is predeceased by two brothers and three sisters. She treasured her family. She, Don, and Doreen were the three “little kids” of the family and had an especially close relationship.

She was born in Torquay, Saskatchewan, to Peder and Dorma Vinge, and came of age in the Depression and War Years. These instilled in her a practical nature and courage to work hard, speak her mind, and face every challenge. She went on to study at the Lutheran Collegiate Bible Institute in Outlook, Saskatchewan, and Concordia College in Moorhead, Minnesota. After teaching in North Dakota and Minnesota, she and Vernon moved to Lethbridge in 1969. She joined the faculty at Catholic Central High School where she taught home economics for over twenty years. She always took a special interest in the lives of her students. After retirement, she and Vernon bought the original Dravland farm in North Dakota, where they spent many summers.

She is remembered as a woman of energy, integrity, and faith. She was always busy, whether with teaching, knitting, or preparing lutefisk or cracked glass candy for entertaining her many friends. She could be counted on to speak her mind openly and honestly. She was a member of the congregation of the Lutheran Church of the Good Shepherd. While watching her and supporting her in the struggle of the last few years of her life, we remember her hard work, energy and enthusiasm for life, faith, and family.

A Memorial Service will be held at 11:00am on Saturday, January 9, 2016 at the LUTHERAN CHURCH OF THE GOOD SHEPHERD, 2406 – 11 Ave. South, Lethbridge. A service of internment will be held at Turtle Mountain Lutheran Church, Carbury, North Dakota, in the summer.

The family is thankful for the skilled and loving care provided by Fairmont Extendicare.

“You do the best you can with the light you have today.”

One Condolence for “DRAVLAND Eunice”