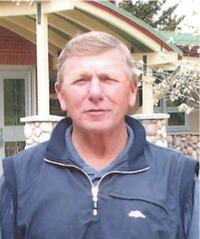 Raymond Gerald Deering, beloved husband of Edith “Edie” Gorzo of Medicine Hat, passed away on Saturday, January 4th, 2014 at the age of 61 years. Raymond also leaves to cherish his memory two sons, Dan Deering (Colette Hahn) of Prince George and Sandon Deering of Medicine Hat; two grandchildren, Tyler and Erica; his father, Arthur Deering; two brothers; and Edie’s family, Marge (Roger) Kessel, Bill Gorzo, Cliff Gorzo, Steve Gorzo, and Derek (Melissa) Kessel. Raymond was predeceased by his mother, Lydia Deering. Ray was born on October 17th, 1952 in Medicine Hat and was raised on the farm south of Irvine. He spent two years at the Calgary Police Force and Academy and was employed with the Medicine Hat Police Force for two years. Ray enjoyed carpentry work and received his Journeyman’s Certificate. He worked on many projects including the Remand Centre, the hospital expansion, and the bridges around Crowsnest Pass. Ray was a member of the UCT/ACT. He was an avid golfer and loved the outdoors and camping. He will be deeply missed and lovingly remembered by his family and friends. The Funeral Service will be held in SAAMIS MEMORIAL FUNERAL CHAPEL, #1 Dunmore Road SE, on Friday, January 10th, 2014 at 2:00 p.m. with Gary W. Goran officiating. Memorial gifts in Raymond’s memory may be made to the charity of one’s choice. Condolences may be sent through www.saamis.com or to condolences@saamis.com subject heading Raymond Deering. Radio funeral announcement can be heard on Thursday around 11:45 p.m. on 93.7 Praise FM. Funeral arrangements are entrusted to SAAMIS MEMORIAL FUNERAL CHAPEL AND CREMATORIUM, “The Chapel in the Park”, locally owned and directed. Should you wish any additional information, please telephone (403)528-2599