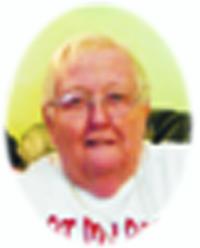 Today we celebrate the life of Katherine Pauline Forester. Katie was born to Ida and Fred Heller on October 16th 1938. She  was raised by her Grandfather and grandmother Gottlieb and  Pauline Jans near Walsh Alberta.
During these early years she came to appreciate and love the man who would not strike his children but was known to remove the whip from a man who was beating his horses and show him what the other end of the whip feels like. Katie loved her aunts and uncles like brothers and sisters. She enjoyed this time very much, riding a Shelton pony to a country school, learning German and English, and living a wonderful life in a large happy family.
When she was a young teenager she went back to live with her parents, and five siblings in Maple Creek. It was during this time she meet the man who would one day become the only man (besides her boys) she would ever love. On December 24, 1954 Katie married that “rebel” Bernard Forester. Through all the trials and tribulations that she and Bernard went through (and there were many) she never ever left his side. No matter what Bernard tried whether it was his painting business, taxi, draying or attempting a bus touring enterprise Katie was always a 100 per cent behind him.
She was a hard working wife and mother. Baking bread was a weekly experience. Cooking for six growing boys  and her hard working husband was something a lot of women would dread but Katie just dug in and got the job done. For many years eight peoples clothes were washed weekly with a wringer washer feed by water hauled from a well by her “non- complaining” boys.
In 1955 Lavern was born to Katie and Bernard, followed by Leonard, William, Leslie, Ronald and lastly Gordon. Having six active boys, kept  Katie very busy. Everyone knew when the shoe came off or the wooden spoon appeared they were in trouble. Evenings were spent playing games or singing songs along with moms  record player. Many young learned how to dance at the Forester house. Katie and Bernard were actively seen kicking up their heels at any dance they could find.
Her boys were her life, always there for the achievements and  a it’ll be ok smile when things did not go as planned. Having six boys meant there were always lots of kids around. Those same kids grew up and came to know Katie and Bernard as their extended parents   Katie loved being  their other “mom”. For the rest of her life Katie always had someone coming up to her telling how they felt the Forester home was their second home. This way Katie always had family everywhere she went. The barbeques or just sitting having a beer became legendary, but oh those water fights , I’m sure those fights are the reason why the town recently had to drill new wells.  Mom would holler about the water in the house but she loved every minute of every drop spilt on those hot summer days spent with her boys and all their friends.
Katie followed Bernard as a home-maker in Maple Creek, Piapot, Moosomin, Yorkton, Medicine Hat and finally retiring back in Maple Creek. She was an active member with the Royal Purple serving many posts and achieving Honored Lady, she was also very active with the seniors centre, and the Legion.
Katie was pre-deceased by her husband Bernard, her mother Ida Heller, father Fred Heller, her sister Joyce Germann and brother-in-law Garry Germann. Left missing her are her six sons Lavern (Cathy), Leonard (Louise), William (Bill) (Bev), Leslie (Sherry), Ronald (Debbie), and Gordon, her sisters Shirley (Allan), Linda (Glen), brother Richard (Bette-Lyne),  Phyllis and 19 grandchildren and 15 great- grandchildren.
Mom you will be missed  more than you know.
Those who wish to may remember Katie with a gift to the Maple Creek Salvation Army.
To email an expression of sympathy you may visit www.gonebutnotforgotten.ca
Binkley’s Funeral Service Maple Creek & Leader in charge of arrangements. 306-662-2292

No Condolences for “FORESTER”