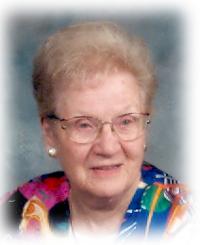 1915 ~ 2014
Mrs. Viola Foster passed away at the Medicine Hat Regional Hospital on Thursday, February 27, 2014, at the age of 98 years.  Vi’s memory will live on in the hearts of her children, Jim (Judy), Don, Diane Dewalt, Dave (Marilyn), Chuck (Gail), Stephen, Janis (Richard) Entem as well as thirteen grandchildren, twelve great-grandchildren, one sister-in- law, Bert Askew and five nephews.  She was predeceased by her husband, Elmer Foster;  parents, Grey and Lillian Askew;  sister, Gwen Askew;  brother, Verne Askew;  son-in-law, Sam Dewalt and an infant son, Michael.  Vi was born in Fort MacLeod and grew up in Medicine Hat.  She graduated from Alexandra High School and from the Medicine Hat Hospital School of Nursing (Class of 1938).  Vi loved her job caring for people, and continued to nurse until she married Elmer in 1943.  She was a long-time member of Westminster United Church and a Charter Member of both the UCW and the Hill Seniors.  Those wishing to pay their respects may do so at Cook Southland Funeral Chapel, 901 – 13 Street S.W., Medicine Hat on Wednesday, March 5, 2014, between 7:00 p.m. and 8:00 p.m.  Visitation will also be offered at the church starting one hour prior to the service.  The funeral service will be held at Westminster United Church, 101 – 6 Street S.E., Medicine Hat on Thursday, March 6, 2014, at 11:00 a.m. with Reverend Jan Stevenson officiating.  Interment will follow at Hillside Cemetery.  (Condolences may be expressed by visiting www.cooksouthland.com)  If friends so desire, memorial tributes in memory of Viola may be made directly to the Medicine Hat SPCA, 55 Southwest Drive S.W., Medicine Hat, Alberta, T1A 8E8 or to Aj’s Loan Cupboard, P.O. Box 45006, McKenzie Postal Outlet, Medicine Hat, Alberta, T1A 7H3.  Honoured to serve the family is COOK SOUTHLAND Funeral Chapel, 901 – 13 Street S.W., Medicine Hat, Alberta, T1A 4V4.  Telephone:  403-527-6455.

No Condolences for “VIOLA FOSTER”