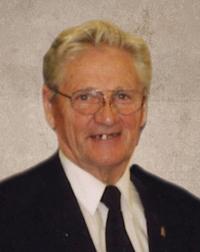 Mr. Percy Edwin Spencer of Bow Island passed away on Monday, June 23rd, 2014 at the age of 85 years. Percy leaves to cherish his memory his friend, Elsie; two sons, Bruce (Pam) Spencer of Lethbridge and Glenn (Susan) Spencer of Pincher Creek; one daughter, Dale Robinson of Bow Island; three grandchildren, Ryan Spencer, Joel Robinson and Wendy Robinson; three great-grandchildren, Elsie, Aidrik and Nash; two step- grandchildren, Adam and Katie; one brother, Sid Spencer; one sister, Mary Roughton; one nephew, Alan (Laurence) Roughton and their daughter, Emily; and one niece, Helen Spencer. Percy was predeceased by his parents, Percy and Elizabeth Spencer; as well as four brothers and sisters. Percy was born on December 17th, 1928 in Hathern, England. Before moving to Canada, he played soccer for Manchester United. For most of his life in Canada he worked for the Alberta Liquor Control Board. Percy also worked for the County of Forty Mile. He enjoyed the little things in life and taking a drive through the mountains and prairies. Percy loved art in many forms; painting and listening to Big Band music were some of his favorite. A Private Funeral Service will be held at Saamis Memorial Funeral Chapel with Gary W. Goran officiating. A private interment will take place at Empress Cemetery. In lieu of flowers, memorial gifts in Percy\’s memory may be made to Pleasant View Lodge, c/o Forty-Mile Foundation, P.O. Bag 6700, Bow Island, Alberta, T0K 0G0. Condolences may be sent through www.saamis.com or to condolences@saamis.com subject heading Percy Spencer. Funeral arrangements are entrusted to SAAMIS MEMORIAL FUNERAL CHAPEL CREMATORIUM & RECEPTION CENTRE, \”The Chapel in the Park\”, locally owned and directed. Should you wish any additional information, please telephone (403)528-2599