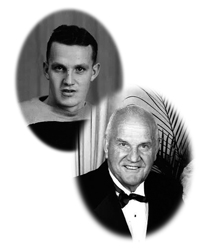 John “Jack” Milton Shupe of Medicine Hat, beloved husband of the late Lila Shupe, passed away on Wednesday, April 10th, 2019 at the age of 89 years. Jack leaves to cherish his memory his children, Judy (Denis), Jill (Keith), Jane, Jerry (Nicole) Shupe; four grandchildren, Morgan, Jessica (Dave), Chelsea (David), Megan (Chad); and four great-grandchildren, Kennedy, Emma, Easton and Zade; as well as numerous nieces, nephews and special friends. Jack was predeceased by his wife, Lila; his parents, Wally and Iva Shupe; his brothers and sisters-in-law, Gaylen and Rae, Blaine and Elizabeth and Doug and Lois. Jack grew up in Weyburn, Saskatchewan. Sports were always important in the Shupe household, he and his brothers played many sports including baseball, golf and curling. Hockey was where Jack really excelled, and it became more than just a passion but a career. This love of hockey is what brought him to Medicine Hat to play for the Tigers. He fell in love with and married his wife Lila who was his partner in life. As fate would have it, he returned to Medicine Hat to coach the team that he once played for, this was one stop on the journey of coaching that took him to new places and created friendships that spanned time. His time with both the Tigers and the Victoria Cougars were successful endeavors where he took his teams to championships. After hockey he enjoyed time with family, playing with his grandchildren and regular meetings with his coffee friends. These were some of his favorite memories and the people that he connected with daily. Jack loved to reconnect with former players and teammates and was grateful for these bonds. He always recognized how truly lucky he was for the abundance of amazing friends and relationships that he cultivated throughout his lifetime. He looked forward to all of the times that he was able to enjoy these connections. We would like to thank everyone for the love and friendship that was shared with our Dad. The Funeral Service will be held at SAAMIS MEMORIAL FUNERAL CHAPEL, 1 Dunmore Road SE, on Saturday, May 4th, 2019 at 11:00 a.m. with Gary W. Goran officiating. Memorial gifts in Jack’s memory may be made to the Canadian Cancer Society, 325 Manning Road NE, Calgary, AB T2E 2P5 or charity of one’s choice. Condolences may be sent through www.saamis.com or to condolences@saamis.com subject heading Jack Shupe. Funeral arrangements are entrusted to