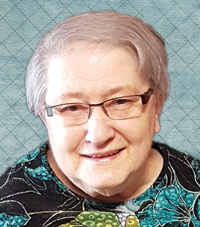 Veronica Dirk passed away peacefully with her family at her side on Tuesday, May 28th, 2019 at the age of 81 years. She leaves to cherish her memory two sons, Dwight (Leilani) of Saskatoon and Darren (Marcia) of Medicine Hat; her grandchildren, Jaden (Jackie) Dirk and Kaitlyn Dirk of Saskatoon. Veronica had many siblings as well as step-brothers and sisters. Her father, Frank Schneider married Odelia who passed away at a young age. They had nine children, Magdalena, Margaret, Mary, Pauline, George, Ben, Adam, Rose and Andrew all now deceased. Her father, Frank then married Regatha Bishoff and they raised his children plus had six more: Anne Wagner, Paul Schneider, Katherine Hauck (deceased) as well as her two surviving sisters, Josephine Koch and Anne Marie Syroiszka. She is also survived by one brother-in-law, George Hauck; as well as numerous nieces and nephews. Veronica was born on the family farm on January 25th, 1938. She helped out on the farm then moved with her family to Medicine Hat in 1956, where she worked at the glass factory. She then moved with her family to Leader, Saskatchewan in 1957 where she married Tony Dirk in 1959. She gave birth to her first son, Dwight in 1960, then Darren in 1965. She worked at Robinson store, then started work at the Leader Hospital in 1961 where she worked in housekeeping for 37 years until her retirement. At the hospital she met numerous patients and was well known for her smile and friendly nature. She always helped out with anyone in need. After she retired she lived in Leader for a number of years before moving to Medicine Hat for 10 years, missed her card playing friends and moved back in 2008. Illness set in and she moved to Cypress View Nursing Home in August 2015 where she lived until her passing. Mom was a very generous, kind-hearted and hard-working person, also well known for her cabbage rolls, kuchen and soups! Her hobbies included crocheting and gardening. She loved her family deeply. She will be missed by all who knew her. Special thanks to the nursing staff at MH hospital ICU and 4 West that showed professionalism and provided outstanding personal care for our mother while in hospital. The Funeral Service will be held at SAAMIS MEMORIAL FUNERAL CHAPEL, 1 Dunmore Road SE, on Saturday, June 1st, 2019 at 11:00 a.m. with Father Tomy Manjaly officiating. A private interment will take place at Saamis Prairie View Cemetery. Memorial gifts in Veronica’s memory may be made to the Alberta Heart & Stroke Foundation, 200, 119 – 14th Street NW, Calgary, AB T1A 7L5. Condolences may be sent through www.saamis.com or to condolences@saamis.com subject heading Veronica Dirk. Funeral arrangements are entrusted to