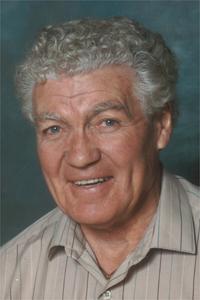 Nickolas John Rosenfelt passed away at St Michaels Palliative Care Centre at the age of 88 years. Nick was born and raised in the Kincaid District, Saskatchewan along with 15 siblings. He moved to Lethbridge, Alberta in 1972. Nick is survived by his loving wife, Dorothy whom he married in 1976. Nick leaves a daughter Tracey (George) Cragg; three children from his first marriage; Carol Rosenfelt, Rodney (Lynne) Rosenfelt, Fay (Neil) Gabrielson; 13 grandchildren and 6 great grandchildren. He was predeceased by his parents Adam and Mary Rosenfelt as well as most of his siblings since he was one of the youngest. Nick worked in the automobile industry for years. He then took a position as a caretaker with the separate school district. He was affectionately called Rosie by everyone at school. He had a great sense of humour and always enjoyed teasing people. Nick was a handyman at heart and was a very hard worker. Moss never grew under his feet. If it was broken, Nick could fix it. He wasn’t happy unless he had a project on the go. He continued in his retirement to help seniors, friends and family with anything he could get his hands on. He also enjoyed hunting, fishing and golfing with his friends. Nick and Dorothy’ s life was always enriched with the love and companionship of their poodles. They also shared many happy memories going on trips with their RV. Nick will be sadly missed by his family and friends. To respect his wishes, a private family service will be held. We would like to acknowledge the kindness and compassion of all the doctors and nurses that took this journey with us. We are eternally grateful for all that you did for Nick. Nickolas John Rosenfelt, you are forever in our hearts.

One Condolence for “ROSENFELT Nickolas”