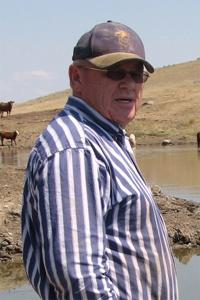 1948 – 2014
Mr. Reid Hirsche of Foremost, beloved husband of the late Sherilynn “Sherry” Hirsche, passed away peacefully at home on the farm with family by his side on Saturday, April 12th, 2014 at the age of 65 years. Reid leaves to cherish his memory five children, Dallas (Tamara) Hirsche of Calgary, Chad (Marilynn) Hirsche of Foremost, Heather (Bruce) Clayton of Strathmore, Brett (Amy) Hirsche and Nicole (Derek) Losey, both of Foremost; his mother, Alverna Mortimer of Langford, British Columbia; his mother-in-law, Jeanne Roth of Foremost; thirteen grandchildren, Lyndsay, Evan, Tyler, Justin, Cole, Chase, Cyle, Katelyn, Dane, Leah, Jack, Damon and Preslee; one brother, Lynn (Loretta) Hirsche of Foremost; three sisters, Linda (Butch) Black of Gabriola Island, British Columbia, Wendy Lortie of Edmonton and Cherie (Tim) Webber of Calgary; his sister-in-law, Janice (Blaine) Poberznick of Medicine Hat; his sister-in-law Annette Roth of Boca Raton Florida; as well as numerous nieces and nephews. Reid was preceded in death by the love of his life, Sherry in 1999; his father, Arvin “Tye” Hirsche; his brother-in-law, Greg Roth; and his father-in-law, George Roth. Reid was born on June 12th, 1948 in Lethbridge. He worked in the oil patch in the early 1970’s, but moved back home to farm and ranch in Foremost. He lived in the original homestead until the time of his passing. In addition to farming, Reid started a gravel business in the 1990’s serving the local community. Reid’s farm, gravel business and cattle were his passion while honesty, integrity and hard work were the cornerstones of his personality. Although he was almost always working on the farm or hauling gravel, Reid always welcomed his friends and neighbours into his home for a coffee and a visit. Reid loved his family, and will be missed dearly by all. He fought a courageous 2 _ year battle with cancer. We take comfort that mom and dad are now together again looking down on us all. We would like to send a special thank you to Dr. Lewke-Bogle and Milk River Hospital and Staff for their excellent care of Reid. The Funeral Service will be held in FOREMOST COMMUNITY HALL, 801 – 1st Avenue West, Foremost, Alberta on Saturday, April 19th, 2014 at 2:00 p.m. with Blaine Poberznick officiating. A private interment will take place at Foremost Cemetery. Memorial gifts in Reid’s memory may be made to the Milk River Hospital, 517 Centre Avenue, Milk River, Alberta, T0K 1M0. Condolences may be sent through www.saamis.com or to condolences@saamis.com subject heading Reid Hirsche. Funeral arrangements are entrusted to SAAMIS MEMORIAL FUNERAL CHAPEL AND CREMATORIUM, “The Chapel in the Park”, Medicine Hat, Alberta. Should you wish any additional information, please telephone 1-800-317-2647.

No Condolences for “HIRSCHE Reid”

Leave a Condolence for Luella Cousins