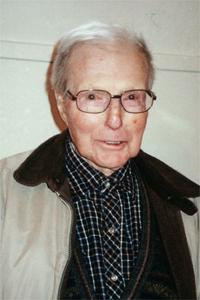 1911 ~ 2014
Tiemen (Tim) Stotyn of Monarch, AB, passed away on Saturday, May 10, 2014 at the age of 102 years ,beloved husband of the late Anna Stotyn. Tim, who was the second of 12 children of William and Stina, was born on Dec.06, 1911 at Monarch. He married Anna Harink in Dec. 1941 who predeceased him in 1999. During his lifetime, Tim worked at various occupations. Most notably, he ran the Monarch Post Office with his wife for many years and worked at the plywood factory in Fort Macleod until retiring in 1980. He had a passion for local history and never tired of sharing his many stories with everyone. Tim is survived by his son, Tymen (Donna) of Monarch. Grandchildren Jason (Lesley) Stotyn of Lethbridge and Cheryl (Shaun) Heck of Moon River. Great-Grandchildren Danica, Eric, Manni and Anneliese. His sister Truda (Walter) Luce of Calgary. His brothers Arie of Lethbridge and Ed (Sheila) of Duncan, BC. Sister-in-laws Eileen, Lena and Ann. Family and friends are invited to pay their respects between 6:00 PM and 8:00 PM on Thursday, May 15, 2014 at MARTIN BROTHERS FUNERAL CHAPELS LTD, 610-4th Street South, Lethbridge, AB. The interment will be at 1:00 PM on Friday, May 16, 2014 at the MONARCH / NOBLEFORD CEMETERY. A Memorial service will follow at 2:00 PM at the MONARCH REFORMED CHURCH. – 2 miles north of Monarch on RR235 In lieu of flowers, donations may be made to the Alzheimer\’s Society (Alberta & Northwest Territories) Lethbridge Chapter, 402-740 4 Ave. S, Lethbridge, AB T1J 0N9. Send condolences at www.mbfunerals.com.

One Condolence for “STOTYN Tiemen”