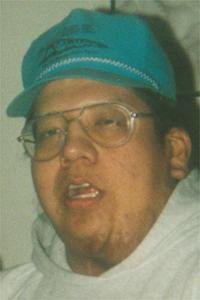 CRAIG FIRST CHARGER-SHOUTING of the Kainai/Blood Reserve, AB suddenly passed away on June 27, 2014 surrounded by his family at Lethbridge Regional Hospital at the age of 42 years. Born August 15, 1971 to the late Jerome and Genevieve (First Charger) Shouting. Craig is survived by his sister: Charlene Shouting, adopted traditional niece and nephew: Shayla and Shane First Charger; surviving nephews and nieces: Troy, Star and Dylan Shouting and Timothy Scout. Leave to be mourned by his great nephew and nieces Treysen Iron Shirt, Troyton, Taige, Tace, and Ta-char, Russell, Shaniell Wells, Logan Heavy Head, Justice Scout, Leah Prairie Chicken, Mackenzee , Accayla , Kenlee and Kendra First Charger. He has three surviving uncles on the Shouting side of his family: Bernard (Agnes), Chris (Sandra) Shade and Marcelle Shouting. Two surviving aunties: Christine (Pat) Little Bear and Brenda (Tallow) Chief Moon. First Charger aunties: Stella, Veronica, Roberta, and Agnes; Uncles: Jerry (Olive), Francis (Judy), Robert, Gary (Joanne) Brian (Michelle) First Charger. He is now with those who have proceeded him just recently his father Jerome Shouting and Mom Genevieve (First Charger) Shouting who passed away in the early 2000, two sister Annette Marie Shouting, and as a child Donna Gene; one brother Mike Shouting and a nephew Ian Shouting; grandparents: Ambrose and Maggie Shouting; and Bob and Bertha First Charger three uncles, Oliver, Ambrose and Morris Shouting and two aunties, Bertha Holy Singer and Louise Shade. First Charge’s side: and an Uncle Joe Crow Spreads His Wings, aunties: Alice, Margret, Theresa, Nadine and Verna First Charger. After Craig attended his early schooling in Coalhurst then continued his schooling in Lethbridge later on he attended the tribe’s Red Crow Community College. The families moved to their new home in the early 1990s on the western end of the Blood Indian Reserve. Here at Lavern he met new friends and relatives where he was welcome as a family member to many families to name a few: his cousins the First Chargers, Chief Moons, Shot Both Sides, Black Plumes, Grosventre Boys and Scouts. He was a simple, down to earth type person only talked once he knows he can trust a person and on the right moments he would tell a story. He would tell a humorous happening about others. He loved his many nephews and nieces who will miss him dearly. The family would like to thank the ICU nurses and staff who on his last day especially his last hour his doctors allowed many friends and relatives to be at Craig’s bedside. We thank the many people who helped with the funeral preparations special mention Alvine and Lester Low Horn. A tribute of Craig’s life commence at 7:00 to 11:00 PM at the Senator Gladstone Hall on Friday, July 11, 2014 with the funeral at 11:00 AM at the Gladstone Hall on Saturday July 12, 2014. Interment in the Pioneer Cemetery in Lavern Community on the Blood Reserve. Meal to follow at the Gladstone Hall. E-mail condolences to: legacyfh@telus.net

One Condolence for “FIRST CHARGER Craig”

Leave a Condolence for Timmy