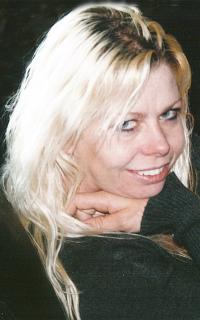 Born February 8, 1972 — Passed Away February 23, 2015
Kitty Buck was born in Lethbridge Alberta on February 8, 1972 where she grew up and attended St. Patrick’s school. She moved to Calgary at age sixteen and finished her High School education. She returned to Lethbridge in 2002 along with the love of her life, Rob Haycock. They returned to Calgary then moved to Picture Butte and on to Coaldale in the winter of 2014. She and Rob have two beautiful children; daughter Roxxy Starr Haycock-Buck and son Thomas Kaige Haycock. Kitty was also step-mother to Jessie, Delano and Damien Haycock. In addition to Rob, Roxxy and Kaige, Kathaleen will be sadly missed by her mother Patricia Buck, father Charles Kropf, sister Elizabeth Taylor (Carl), brother James Buck (Deanna), nephew Dustin Taylor, as well as brother Stephan Kropf and sister Shaunna Bremner. She was also loved and will be missed by many aunts, uncles, cousins and friends. A Memorial Service will be held at Chapter House, 17A St & 10 Ave S. Lethbridge at 2 p.m. on Sunday March 1, 2015, with Rev. Aldeen McKay officiating.

Leave a Condolence for Carmen