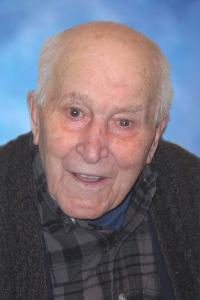 REDENTO MICHAI VUCH, passed peacefully on March 10th, in Lethbridge, Alberta, at the age of 102 years. He was predeceased by his wife Stefania. Redento was born at Seghetto, Austria-Hungary on September 29, 1912, one of seven children. Throughout his life, he overcame many obstacles. He was raised in extreme poverty in war-torn Europe and the family hardships continued with the Great Depression. He was conscripted into the Italian Army three times. While on a weekend leave in 1939, he married the love of his life Stefania. From 1943-1945 he was a prisoner at Dachau concentration camp where survival was a daily struggle. After the war ended, he literally walked back to Italy only to find that he no longer owned his house since the redrawing of borders his village was part of now communist Yugoslavia. Life was very difficult. In 1956 he fled from communism with his wife and children and they became refugees in Italy. When there was an opportunity to leave the refugee camp, the family moved to Taber, Alberta where they were employed as sugar beet workers. Upon moving to Lethbridge in 1969, Redento was employed as a labourer until his retirement in the early 1970’s. He finally had the time to pursue his true passions: gardening, making prosciutto and home-made wine. Although he was a man of few words, he enjoyed the company of others. For someone with a grade three education, he was very insightful and impacted the lives of many people. He was a modest, hard working person who respected everyone. For our Nonno, family was the top priority and the grandchildren and great-grandchildren were always very special to him. He lived a long and rich life and when asked what the secret to longevity was, his response was…”luck”. He will be missed by his children Egidio (Betty Lou), Fiorenzo (Debbie) and Nella (Daryl), seven grandchildren, eleven great-grandchildren, and one great-great-grandchild. He is survived by his sister Basilia in Croatia, and various nephews and nieces in Canada, Croatia, Italy, England, Peru and the United States. He will now rest peacefully with his wife of 72 years, at the Mountain View Cemetery in Lethbridge. A special thanks to his caregivers over the past several years, Lucy, Janna and Judy. No flowers please. A Private Graveside Service will take place.