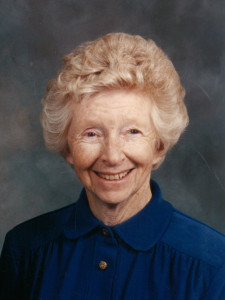 Mrs. Barbara MacDonald Simmons of Lethbridge, beloved wife of the late Mr. Robert Simmons, passed away on Saturday, March 21, 2015 at the age of 91 years. Barbara (Barb) McDonald Simmons passed away in Lethbridge, Alberta on March 21, 2015 at 91 years of age. She overcame several falls in the last few months resulting in broken bones. The most recent fall was too much for her frail body and although she tried very hard she could not recover. Barb was the oldest child of George and Barbara Dickson and was born in Fordyce, Scotland on April 10, 1923. She grew up with her younger brother Dugald in the manse connected to the church where her father was the parish minister. She excelled at school winning many scholastic awards at the acclaimed Fordyce Academy. She graduated from Aberdeen University in 1943 with a degree in Education and began her teaching career in Torphins, a small village near Aberdeen. Near the end of World War II she met Bob Simmons, a Lancaster Bomber Pilot Officer overseas in the Royal Canadian Air Force. After the war Bob moved back to the family farm at Rosemary, Alberta. In what must have been a bold move for the day, in July 1948 she travelled to Rosemary to be with Bob and to see if she would like it in Canada. She decided to stay and the two were married at Christmas that year. They settled in Edmonton while Bob went to University and Barb continued to work as a teacher. Upon Bob’s graduation they moved to Taber where Barb again taught school before starting a family and ultimately settling in Lethbridge. With four children Barb gave up her career in order to raise her family and spent her spare time in service to the church and the community. As an active member of McKillop United Church and the UCW, she spent tireless years visiting seniors in care facilities as part of the Pastoral Care Committee. She worked for the Kiwanis Club alongside Bob, who was a long time member. She served for over 30 years for Meals on Wheels as a meal courier and on the Board of Directors. She enjoyed Scottish Country Dancing, her Bridge Cub and golf. She particularly enjoyed the various activities of her children and grandchildren. She was a Dance Mom and a Hockey Mom. She cherished her children and grandchildren and they loved and respected her. Barb was truly the most kind person you could ever meet and a very gentle soul. She loved all animals, particularly the family cats and watching the birds in the backyard of her home. She was even seen, on more than one occasion, trapping a housefly under a glass in order to release it safely outside. She will be greatly missed by her many friends and family. Barb is survived by her four children; Colin Simmons (Kyra) of Calgary, Ron Simmons (Susan) of Winnipeg, Kathleen Murphy (Charlie) of Lethbridge and Debbie Buksewich-McPhie (Curtis) of Vancouver; and her seven grandchildren, Ryan, Alaire, Danielle, Bobby and Genevieve Simmons, and Ainsley and Aleah Murphy. Barb was predeceased by her beloved husband Bob in 2013, her mother Barbara and father George, her brother Dugald and his wife Pat, her grandson, William Murphy, and her granddaughter Alexandra Simmons. Barb’s family would like to extend their deepest appreciation to the staff at the GARU unit on floor 5A of the Chinook Regional Hospital for the care and attention they provided to Barb during her last days. Also a heartfelt thanks to the staff of the Columbia Assisted Living Center for making Barb feel “well taken care of” for the last two years. Family and Friends are invited to pay their respects between 7:00 and 8:00 pm on Friday March 27th, 2015 at MARTIN BROTHERS RIVERVIEW CHAPEL, 610 – 4th St. S., Lethbridge, Alberta. A Funeral Service will be held at 3:00 pm on Saturday, March 28, 2015 at MCKILLOP UNITED CHURCH, 2329-15 Ave. S., Lethbridge, AB. In lieu of Flowers, donation can be made to The Lethbridge Society for Meals on Wheels, c/o LSCO, 500 11th Street South, Lethbridge, AB, T1J 4G7. Visit www.mbfunerals.com to send a private condolence.

One Condolence for “SIMMONS Barbara”

Leave a Condolence for Anne Matteotti