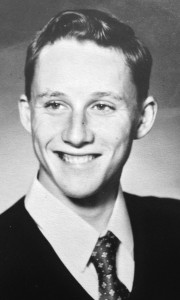 Francis James Fretwell passed away April 14, 2015, at the Centennial Centre for Mental Health and Brain Injury in Ponoka, Alberta. Frank was born on June 15, 1941, in Lacombe, Alberta. Frank was predeceased by his parents Geoffrey and Ivy Fretwell. Frank was raised on the farm at Clive, Alberta. He attended 6 years of school at Eclipse school, adjacent to the farm. He moved on to Clive and Lacombe schools for junior and senior high school. Frank enjoyed working with his father’s purebred Shorthorn cattle. He helped to show the cattle at Red Deer Fair, and was active in the 4-H beef club. He also enjoyed the Youth Group in his church, and played the guitar in a worship band. Frank went on to study Agriculture at the University of Alberta for two years. Frank is survived by his brother, David (Janet) Fretwell, and sister Edith (Arnold) Enns; also neices and nephews Terra Fretwell, (Malcolm McNamara), Shannon (Jussi) Saramaa, daughters Mila and Haley; Laurene (Jeff) Vanden Elzen, Trevor Enns, daughter Elizabeth, and Sandra (Thom) Buhr. Frank will be deeply missed by staff, family and friends who knew him. Frank received excellent care at the Centennial Centre especially in his geriatric years. A Funeral Service will be held at Wilson’s Funeral Chapel, 6120 Highway 2A, Lacombe, on Wednesday, April 22, 2015 at 10:00 am with interment to follow at the Lacombe Fairview Cemetery. Condolences may be made by visiting www.wilsonsfuneralchapel.ca

One Condolence for “FRETWELL James”

Leave a Condolence for Janice Chapman