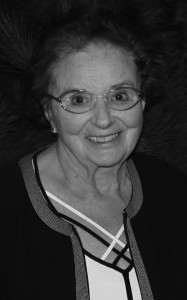 Mrs. Gertrude (Gert) Myrtle Talbot, beloved wife of the late Mr. Les Talbot, passed away peacefully on May 10, 2015 at the age of 88 years.

Gert was born on January 18, 1927, the second child of Henry (known as Harry) Teare and Alice (Reeves) of Lacombe, AB; sister to Jessie Joy Lund and Frederick Wilson Teare.

Gert grew up in Lacombe and graduated from Lacombe Nelson High school. While attending high school she worked as an AGT operator and met her husband- to-be, Les. On August 19, 1946 she married George Leslie Talbot of Lacombe, AB. They moved to Calgary where Gert worked for the Palliser Hotel as a switch board operator. Next came Edmonton for one year while Les finished his Bachelor of Industrial Arts. In 1949 they went east to Montreal where Les started his first job and they started their family; all daughters – Elizabeth Louise born August 4, 1955 (deceased August 16, 1958), Deborah Ann born July 8, 1957, Barbara Lynn born November 26, 1959 and Mary Patricia born October 8, 1963. The family moved to Winnipeg in 1965 where the girls grew up and Gert became a realtor. Gert and Les moved to live and work in Lethbridge in 1979.

As well as being a beloved mother, she volunteered with various events for people with disabilities, including taking 16 teenagers in wheelchairs to Expo67 in Montreal from Winnipeg. Her passion was doing crafts from sewing to decorating elaborate bridal shower cakes. Gert faced a number of health challenges, including cancer in her early 50’s and a heart attack in her 80’s. She credited her strong faith in God for getting her through some difficult times as well as providing the wonderful times in her life.

In lieu of flowers, memorial donations can be made to: Canadian Cancer Society 317 10th Street South, Lethbridge, AB T1J 9Z9

One Condolence for “TALBOT Gertrude”

Leave a Condolence for Co and Flore Langeslag