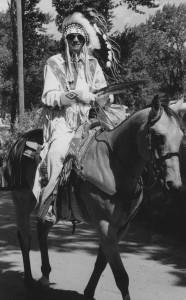 FRANK WEASEL HEAD/Miiksskim was born at the Blood Indian Hospital, Blood Reserve, Alberta on October 29, 1938, to Pat/Mokakin and Paula/Poona Weasel Head. In his early years Frank’s family resided with his paternal grandparents – Mr. and Mrs. Jack Weasel Head at their homestead in the Belly Buttes area. In 1948 he moved with his parents to the Bullhorn area.

Frank owned several Blackfoot names as part of our customs and traditions. His childhood name was Naatohkoo; he then changed his name to Naamowa’sitaa upon the transfer into the “Back Side to the Fire Medicine Pipe Bundle”. He obtained his grandfathers’ name Taatsikiipoyii/Iron, and his great-grandfather’s name Kiisoom. Most recently he acquired the name Miiksskim/Iron.

At the age of 7 years old, Miiksskim was sent to the St. Mary’s Indian Residential School until grade 9. He then ,went to school in North Battleford and Campion College in Regina, Saskatchewan, where he completed grade 12. He returned home and completed business studies at Henderson College in Lethbridge, Alberta. His brother, Pete, fondly remembers when Miiksskim hitchhiked home from Saskatchewan with 10 cents in his pocket! His wife Sylvia confirmed this story and added that the good citizen that brought Miiksskim home was very kind.

He married Sylvia nee Fox on October 10, 1975. Frank and Sylvia moved to their homestead on July 1st, 1980. Frank then joined Sylvia’s ranching business and bought cattle and began ranching. In 1985 Frank and Sylvia bought their first quarter horse and the racing bug hit him for 10 years. His favorite race horse was Oak Trees Ruff Enough, who won several AQHRA races. Miiksskim partnered in this venture with his brothers and several nephews. Miiksskim participated in timed-rodeo events, following in the footsteps of his father, Mokakin, a saddlebronc rider.

His employment began as the office manager with the Blood Tribe Administration, when it was located at the Cardston Post Office. He worked with the Alberta Communication Society in Edmonton, Alberta. He returned home and worked with Kainai Industries. Miiksskim assisted Tribal ranchers and farmers while he worked for Alberta Indian Development Corporation on the Blood Reserve starting in1982. For health reasons Miiksskim had to retire in 1992.

In 1961, Miiksskim continued the ancient tradition of taking the Back Side to the Fire Medicine Pipe Bundle. In 1976 his brother Moses took the same Pipe bundle. In 1981, while in possession Moses passed away. Miiksskim gladly filled in to care for the Pipe Bundle, until it was transferred in 1986.

He first belonged to the Horn Society in 1972, with his friends The Magpie Society/Mamia’tsikimiikski. In 1985 Miiksskim rejoined as a partner, where he helped his nephew and his nephew’s wife, Bruno and Corrine Many Bears. At the most recent Horn transfer Miiksskim advised and supported many new members, especially his family members who joined.

In 1995 Miiksskim became a founding member of the Mokakin Foundation. Miiksskim was a serving board member at the time of his passing. In 1997 Miiksskim repatriated Naamaahkoinimaan bundle, from the Peabody Museum, Boston, MA. He asked members of the tribe if anyone wanted to take care of it. When no one could be found, Miiksskim and Sylvia became holders in May, 1998. In 2001 Miiksskim transferred Naamaahkoinimaan to the late Narcisse Blood and Alvine Mountain Horse. Miiksskim continued to work with the late Narcisse Blood in the Shirts Project travelling to England and Scotland.

Miiksskim was instrumental in assisting the Tribe in the successful repatriation of a number of religious artifacts from the Peabody Museum, Boston, Ma, The Smithsonian Institute in New York, NY, and various museums in Washington DC & Denver Co. He devoted his life to the Tribe in the relentless pursuit of preserving the Tribe’s culture, traditions & customs.

His testimony as a key witness during the Aker’s land Claim Indian Claim’s Commission Hearing helped in the successful settlement of the claim. His knowledge of oral history also contributed towards the on going negotiations of several other claims. He was scheduled to testify in the upcoming elder’s hearing on the Tribe’s Big Claim.

Up to the time of his passing he was working with the Blood Tribe’s Traditional Land Use Department & was with the Red Crow Community College’s Elder’s Advisory Group. Ni’tsitapi stories can be heard at the Glenbow Museum, where Miiksskim sat on the Elder’s Advisory Committee for the permanent installation of the Ni’tsitapi display.