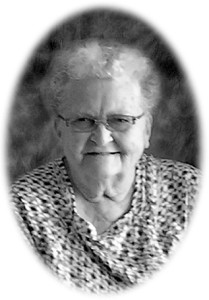 On Monday, July 13th, 2015, 11 days short of her 91st birthday, SHIRLEY MAY GOODFELLOW passed away peacefully in the Chinook Regional Hospital surrounded with the love of her three daughters, Sharon, JoAnn, Kelly and granddaughter Stephanie.

Shirley was born in Holmquist, South Dakota on July 24th, 1924 to Chris and Hazel Jespersen. In 1934, the family moved to Taber, homesteading in the Wadena District. On March 4th, 1943, Shirley married the love of her life, James (Jim) Goodfellow. Together they raised five sons and three daughters, farming south of Taber for 29 years as well as ranching in the Pincher Creek area. In 1974, Jim and Shirley moved to Pincher Creek along with their two youngest children, where Jim and his son Chris formed Goodfellow Trenching Ltd. In 1985, Jim and Shirley semi-retired and moved to their beloved “Christie Lodge” in the foothills, southwest of Pincher Creek. Even after Jim’s death in 1991, Shirley remained at their home in the hills. During the last five years, Shirley spent her winters with her daughter JoAnn and family in Diamond City, returning each summer to Christie Lodge. Shirley would sit for hours in her kitchen, cross-stitching and looking out her window over the pasture towards Christie Ridge, enjoying the return of her hummingbirds each year.

She will forever be remembered for her quick wit, humour and her love for gardening, sewing, quilting, knitting and cross stitching. These skills were continually being passed onto her children, grandchildren and great-grandchildren.

Relatives and friends are invited to pay their respects at CORNERSTONE FUNERAL HOME, 2800 Mayor Magrath Drive South, Lethbridge on Friday, July 17, 2015 from 7:00 to 8:00 P.M.

The Funeral Service will be held at KNOX UNITED CHURCH, 4929 – 50th Avenue, Taber on Saturday, July 18, 2015 at 2:00 P.M. with Reverend Bob Wallace officiating. Interment to follow at the Taber Memorial Gardens.

In lieu of flowers, the family would deeply appreciate that donations in memory of Shirley be made to the Heart and Stroke Foundation, P.O. Box 2211, Lethbridge, AB, T1J 4K7 or Canadian Lung Foundation. Suite 208, 17420 Stony Plain Road N.W., Edmonton, AB, T5S 1K6

One Condolence for “GOODFELLOW Shirley”