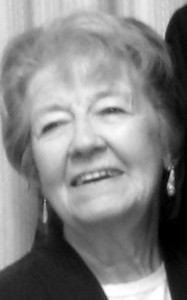 It is with great sadness that the family of EVELYN ANNA LOUISE HENDRY announces her passing on August 27th, 2015, at the age of 85 years. Evelyn was born January 29th, 1930, in Calgary to Mary Louise Campbell and Kenneth George Campbell. She spent the majority of her working career in the oil industry in Calgary as an executive assistant to senior management.

Evelyn dearly loved the prairies she grew up on and spent her early life in Mundare, Vegreville, and Edmonton before returning with her parents and sister to Calgary. Evelyn valued her connection with aunts, uncles, cousins, and myriad extended family and delighted in tracking and documenting her family tree. She was married in 1954 to Donald Hendry and moved back to his native Scotland for three years with their infant daughter Pat, which contributed to her pride in her Scottish heritage.

Shortly before her retirement, she relocated to the small town of Raymond and fell in love with the history and people. She volunteered countless hours of time with the Raymond and District Historical Society, the Ag Society, the Ladies Auxiliary of the Raymond Hospital, and the Canadian Cancer Society. Her work as president of the Historical Society lead her to write the book “Veterans’ Voices” in 2001, an endeavour that won her a medal of honour from the Canadian Legion.

The Funeral Service will be held at the CHURCH OF JESUS CHRIST OF LATTER-DAY SAINTS, TAYLOR STREET CHAPEL, 4th Street W and 2nd Street N, Raymond, on Tuesday, September 1, 2015 at 11:00 A.M., with Bishop Gregory Smith officiating. Interment will follow in the Temple Hill Cemetery, Raymond.

One Condolence for “HENDRY Evelyn”

Leave a Condolence for Esther