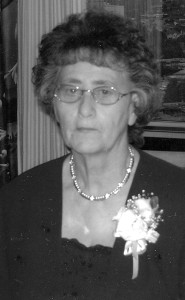 EVA DAHL (SMITH) ANDERSON passed away at the Good Samaritan’s Society in Raymond on Monday, September 7, 2015 at the age of 79 years.

She is the loving mother of: Roger (Lori) Smith, Greg Smith, Gerald Smith, all of Seattle, Washington, and Brian (Kelly) Smith of Baltimore, Maryland. She is also survived by her 11 grandchildren and her siblings: Reed Dahl, Eileen Anderson, Marvin Dahl, Linda Adams, and Lois Lybbert.

Eva was born December 17, 1935 in Raymond, AB to Ened and Clifford Dahl in their farm home. She graduated from Raymond High School then moved to California to work as a comptometer operator for Standard Oil. She moved back to Raymond and married Frederick Smith. They opened the first pizza restaurant in Alberta, which was in Lethbridge. They had four boys within 4 1/2 years. She became a busy stay at home mom! She loved recipes, cooking, and gardening. After living on Vancouver Island, BC for 9 years, Eva and the boys moved back to Raymond.

Later she was married to Don Anderson for 10 years and ran a Bed & Breakfast in Mountain View, AB. After leaving Don, Eva moved back to Raymond where she lived the rest of her life. She suffered with Parkinsons disease for many years. She will be greatly missed by her boys, their wives, and her grandchildren.

A Funeral Service will be held at The Church of Jesus Christ of Latter-day Saints, RAYMOND STAKE CENTRE, 2 North, 200 West, Raymond, on Saturday, September 12, 2015 at 11:00 am, with Bishop Craig Palmer officiating.

One Condolence for “ANDERSON Eva”

Leave a Condolence for Linda Elfring