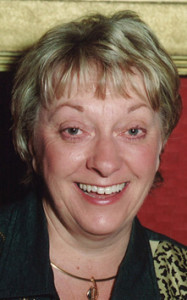 Ginny (Virginia) Goulet of Moon River Estates, Alberta, passed away peacefully on Sunday, August 23, 2015 at St. Michael’s Health Centre in Lethbridge, Alberta at the age of 64 years. Ginny is lovingly remembered by her partner Brian Dalshaug, mother Lillian Goulding, sister Cindy Goulding (Paul Kiziak), nephews Ryan (Kayla) and Corey Pullyblank, great nephew Parker, as well as other family members and close friends. She was predeceased by her father, Ernest Goulding. Ginny was born November 23, 1950 in Blairmore, Alberta. When she was young, the family moved to Lloydminster, Alberta. Her adult life brought her to Red Deer, Alberta and then to Moon River Estates, Alberta. Ginny worked in the office for Fas Gas and the Royal Bank in Red Deer, and then became a Casino Advisor, working with countless volunteers within the Red Deer and Calgary regions. For many years, Ginny ran Ginmist Kennels, raising and showing German Shepherd dogs. She is also survived by her beloved shepherds Roxy and Luke, who are also left mourning her passing. She loved to travel to hot destinations, cruising, going on off shore excursions, reading and gardening. She also loved to entertain; her love of cooking brought many to her table to feast on her delicious creations. She loved Christmas, and it showed with her decorations in and outside her home. Ginny was a force, an active and vibrant woman, who would light up a room with her presence and laughter. Ginny was always willing to lend a hand. She had amazing organizational skills and was always extremely dedicated to each project she took on. Her generosity and compassionate nature lifted the spirits of those who needed it. She was an inspiration to those that met her. She was very active in the communities in which she lived. She selflessly volunteered countless hours through the years to many causes that she was passionate about, including: Job’s Daughters International, Red Deer Kennel Club, Red Deer SPCA, Scotty Tournament of Hearts, CIBC Run for the Cure-Canadian Breast Cancer Foundation, Relay for Life–Canadian Cancer Society, and the Alzheimer Society of Canada. At the time of her passing, she was a highly committed senator for the University of Lethbridge, and chairperson of the Children’s Wish Foundation for the Lethbridge area. As per her wish, there will be no formal service. A celebration of Ginny’s life was held on August 29, 2015. In lieu of flowers, memorial donations may be made to the Children’s Wish Foundation, http://www.childrenswish.ca/ in memoriam, indicating the Pumpkin Festival, Lethbridge, Alberta, Alberta/NWT Division.

Leave a Condolence for Corrina Craig