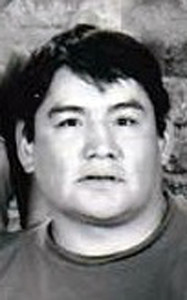 Lynel Tailfeathers was suddenly called home by the Creator on September 12, 2015, at home in Bullhorn (Blood reserve), AB. He was welcomed to the world on April 5, 1973, at the Cardston Municipal Hospital by his parents Barbara, Lyman and sister Jolaine and later by Jade Leah.

Lynel was the beloved husband and best friend of Alanna Eagle Bear, devoted and loving father to Lexei, Payton and Marshal.

He was bestowed with the Blackfoot name (Night Traveller), by his late grandmother Adelaide because of him and his mom’s late night visits to grandma’s.

Lynel grew up in Bullhorn Country of the Blood reserve where he became the adventurous and free spirit he was. He never ventured too far from his parents and their homestead with the beautiful Rocky Mountains in the background. He spent his childhood days playing with his friends: Neal, Billy, Todd, JJ, Joe, Chris, Jonathon and Troy just to name a few. Time was spent playing ground hockey, biking, fishing and just being mischievous.

Lynel attended both Elementary and High School in Cardston where he graduated in 1991. Around that time he fell in love with his childhood sweetheart and lifelong love, Alanna. Their family life began, and eventually they had three beautiful children: Lexei, Payton and Marshal. Alanna and Lynel resided in Lethbridge while attending College and University. They eventually returned to Bullhorn to call home.

Lynel’s varied life included a focused involvement in hockey. He became an avid hockey player at all levels of the sport. He acquired numerous hockey hardware and titles. Highlights included an MVP in the prestigious Mac’s Midget “AAA” hockey tournament in 1990. Famed broadcaster and legend Howie Meeker highlighted Lynel’s perseverance to his team and to the sport of hockey, informing the worldwide audience of how far he travelled to practice every day. Lynel spent well over four hours each day in keeping with his dedication and commitment to his training, travelling back-and-forth to the various rinks honing his skills.

Lynel reminisced about his title with pride. He also played Junior ‘B’ with Olds and Calgary Royals. Locally, he played with Kainai Golden Chiefs and Kainai Braves. He also played High School football, soccer and baseball.

In later years, when Lynel’s children became involved in minor hockey, he was very proud to coach both Lexei and Payton’s first year of peewee hockey in which they played on the same team. He joked about how at practice Payton would tell his sister: “There’s no screaming in hockey”. That year he was also nominated for “Coach of the Year”.

Lynel possessed numerous work skills such as equipment operator, contracting and carpentry. His places of employment included Bus Co-op, Alta Link, Blood Tribe Public Works, BTEST, Blood Tribe Housing and most recently at FCSS. While at FCSS, Burton Many Fingers, his supervisor, would tell Lynel’s in-laws how hardworking, helpful, cooperative and self directed he was.

Lynel had a kind, humble and generous heart and helped many acquaintances along life’s way. Many would say, “Lynel would give the shirt off his back to anyone in need”. His greatest value was the love he had for his family, especially his wife Alanna and children. One of the most precious sayings to his parents was simply: “I love you.” He cared deeply for all those he was in contact with. Whenever his parents went to Lethbridge, they would always bring home with them one of his favorite treats: two double whoppers. He excelled at being very domestic at home and caring for his children. Lynel could whip up some pretty tasty meals. He loved to cook and BBQ and watch The Food Network.

Lynel will be forever missed by his friends, especially those he always had to speak with daily. These included Kyle (Edos), Todd and Jarvis.