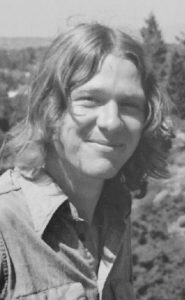 DAVID ARTHUR PAUL PACAUD passed away suddenly at home on Wednesday February 15, 2017 at the age of 62 years. David is survived by his son Matthew of Calgary, his brother Warren (Bonnie) of Calgary, his sister Claire Mose (Sidney) of Calgary and brother Harold (Harry) of Edmonton. He is also survived by nephews Phil (Haley) and Brad of Vancouver, nieces Ashley and Lindsey of Edmonton. He was also great uncle to Charley and Caden of Vancouver. David is also survived by many aunts and uncles as well as cousins. He was predeceased by his father Charles (Harold) Pacaud and his mother Theresa (Terry) Pacaud and many aunts and uncles. David will be sadly missed. He was born in Halifax, Nova Scotia and the family moved to Lethbridge in 1961. David worked in construction most of his life. He was a hard worker and enjoyed the simple things in life. He loved the ocean, music and playing his guitar. Before his surgery for cancer in March 2016 he was employed with Changing Patterns in Lethbridge. He loved his work and his crew. A special thank you to Dr. Donald Gibb, Dr. George Roxin and the Doctors and Staff at the Jack Ady Cancer Centre.