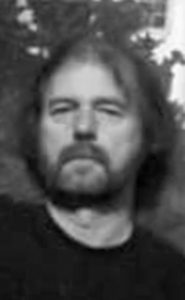 Mr. Robert “Bob” Filgas of Lethbridge, husband of the late Angelika Filgas, passed away after a lengthy illness, on May 7, 2017 at the age of 61 years. Robert was born July 23, 1955, in the Lethbridge Regional Hospital to David Ernest Filgas and Marilyn Miladinovic. He attended Hamilton Jr. High and Lethbridge Collegiate Institute. Bob worked for Lethbridge Iron Works and Southern Feeds prior to becoming self-employed as a painter and maintenance man. He enjoyed music, collecting records, old cars and politics. He leaves behind his daughters, Crystal Lynn (Darren) Stevenson and Teresa Lynn (Michel) Vankriken; son, Jason Cory Filgas; grandchildren, David Vankriken, Alissia Vankriken, Valerie Vankriken and Cayley Stevenson; sisters, Brenda Filgas and Michelle (Randy) McGrath; brothers, Ronald (Judy) Filgas and Randy Filgas; mother, Marilyn Miladinovic as well as numerous nieces, nephews and their families. Bob was predeceased by his son, David Michael Filgas and his father, David Ernest Filgas. A Graveside service will be held at 11:00am on Friday May 19, 2017 at the MOUNTAIN VIEW CEMETERY, Lethbridge, AB, with Pastor Rohan Crown officiating. A Memorial Reception will be held at 1:00pm at the McKillop United Church, 2329 15 Ave South, Lethbridge, AB. Flowers are gratefully declined. For those who wish, donations in Bob’s memory can be made to the Canadian Cancer Society, 200, 2424 4 St., SW., Calgary, AB, T2S 2T4.

One Condolence for “FILGAS, Robert”

Leave a Condolence for Joanne