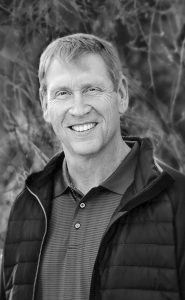 Scott Reiter, husband of Ruth, father to Karly and Nathan, son of Louise Reiter, passed away early Wednesday morning, January 16, 2019. He battled a strong battle with cancer, and he did it with dignity and grace. Born into a close family on a farm north and west of Iron Springs on February 11, 1963, he learned the ethic of hard work, experienced the joy of large family gatherings and developed a much-admired ability to be gentle, just and strong in the face of a storm. He completed school in Iron Springs (Huntsville) and Picture Butte High, recognized for academic achievements and celebrated for his athletic prowess in basketball and baseball. Upon graduating with distinction from the University of Lethbridge Computer Science program, he worked with two companies providing technical support for businesses. Then he operated Reiter Computers for 18 years, taking pride in his professional ability to help customers succeed. As a founding member of the Lethbridge Community Band Association (the trumpet player) and a long-standing baritone saxophone player in the Lethbridge Big Band, he ensured that the music he loved was central to southern Alberta culture. A fierce love of baseball motivated him to be an ambassador of the sport as a coach, an umpire, a volunteer and a board member. His greatest devotion was to his wife, Ruth and his children, Karly and Nathan as well as his mother, Louise Reiter and his large, exuberant extended family. He was an inspiration to us all as a husband, a son, a brother, an employer, a community leader, an uncle, a neighbor and a friend. He leaves the best of memories for Ruth, Karly, Nathan and Louise; aunts Antonetta Baer and Elvira Linders; brothers Kevin (Cathy), Ward (Robin); his sister Erin (Terry Johnson); brothers-in-law Larry Low (Marcy) and Garry Low (Libby Karier); sisters-in-law LillAnne Jackson (Claudio Costi) and Maureen Black (Derold) as well as special friends Jane and George Blair. He is cherished by nieces, nephews and cousins and their partners and children. A Celebration of Life will be held at 3:00pm, on Sunday, January 20, 2019 at SOUTHMINISTER UNITED CHURCH, 1101 – 4 Avenue South, Lethbridge, Alberta, with Pastor Richard Brown officiating. Baseball friends are invited to wear your favorite baseball jersey to the service. For those who wish, memorial donations may be made to the Prairie Baseball Academy Society, 545 – 6 Ave. N. T1H 6N8. “So loved, you are. And missed already, Scott. Forever remembered … “

Leave a Condolence for Brenda Dudas