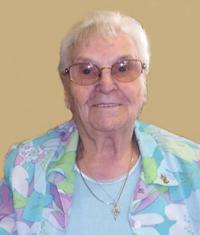 RoseMarie Wetsch of Medicine Hat, beloved wife of the late Kasper Wetsch, passed away on Tuesday, October 22nd, 2013 at the age of 91 years. RoseMarie leaves to cherish her memory five children, Frank (Ann), Jane (Michael) Stanko, Paulette (David) Smith, Beatrice (Ron) Weisgerber, and Bernadette (Rod) Tessem; fourteen grandchildren; twenty-three great- grandchildren; two sisters-in-law, Sister Jane Francis Wetsch and Pearl Weiss; as well as numerous nieces, nephews, cousins, and good friends. Rose was predeceased by her husband, Kasper; one son, Joseph in infancy; her parents, Conrad and Brigetta Weiss; one granddaughter, Loralle Stanko; five brothers; and six sisters. RoseMarie was born in a sod house on May 29th, 1922 on the farm near Krassna, Saskatchewan when there was just a church and a post office (six miles north of Fox Valley). She was baptised at the church in Krassna and was raised and educated in the area until the age of 15. She then attended St. Angela’s Academy in Prelate from 1938 to 1944. Upon fulfilling her commitment in June 1944, RoseMarie came home and on October 28th, 1944 married Kasper on his birthday. Together they farmed at Schuler on Kasper’s homestead until 1980 when they moved into Medicine Hat. Kasper continued to farm from town with their oldest grandson until 1983. RoseMarie enjoyed bowling, curling, baking and cooking. She loved cooking and sewing for her grandchildren! They were her pride and joy. RoseMarie was a member of the CWL for over 60 years and an active church goer for over 91 years. RoseMarie will be sadly missed by all those who knew and loved her. Those wishing to pay their respects may do so at SAAMIS MEMORIAL FUNERAL CHAPEL, #1 Dunmore Road SE, on Sunday from 6:00 to 6:55 p.m. and at HOLY FAMILY PARISH, 1451 Strachan Road SE, on Monday from 9:30 to 10:25 a.m. Vigil Rites (Prayers) will be held in SAAMIS MEMORIAL FUNERAL CHAPEL on Sunday, October 27th, 2013 at 7:00 p.m. The Funeral Mass will be celebrated at HOLY FAMILY PARISH on Monday, October 28th, 2013 at 10:30 a.m. with Father Philip Le, celebrant. Interment will follow in the Roman Catholic Section at Hillside Cemetery. In lieu of flowers, memorial gifts in RoseMarie’s memory may be made to the Holy Family Parish Building Fund, 1451 Strachan Road SE, Medicine Hat, Alberta, T1B 4V3. Condolences may be sent through www.saamis.com or to condolences@saamis.com subject heading RoseMarie Wetsch. Radio funeral announcement can be heard on Friday around 12:35 p.m. on 93.7 Praise FM. Funeral arrangements are entrusted to SAAMIS MEMORIAL FUNERAL CHAPEL AND CREMATORIUM, “The Chapel in the Park”, locally owned and directed. Should you wish any additional information, please telephone (403)528-2599

Leave a Condolence for Shirley Gardiner