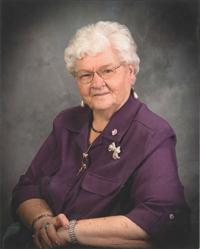 Mrs. Regina Fuchs of Medicine Hat, beloved wife of the late Mr. John Fuchs, passed away on Tuesday, October 29th, 2013 at the Medicine Hat Regional Hospital Palliative Care at the age of 89 years. Regina leaves to cherish her memory her only daughter, Maureen Bosch of Medicine Hat; granddaughters, Tammy (Terry) Gardner and Shelly (Aaron) Middleton, both of Medicine Hat; the apple of her eye, her great granddaughter, Isabella Middleton, whom she truly adored; two sisters, Isabelle Kabatoff of Kelowna, BC and Rose Wilson of Vernon, BC; two brothers, Ed (Rae) Sehn of Winfield, BC and Tony (Bernie) Sehn of Armstrong, BC; two sisters-in-law, Ruth Sehn of Camrose and Martha Mayer of Calgary; and numerous nieces and nephews. Regina was predeceased by her husband, John; parents, Edmund and Rose (nee Duchscherer) Sehn; son-in-law, Sebastian “Seb” Bosch; John’s parents, John and Katherine (nee Michel) Fuchs; four sisters, Tillie (Joe) Beaulac of Paradise Hill, SK, Mary (John) Schafer of Box Accord, AB, Katherine Sehn of Fox Valley, SK and Josephine (John) Bleile of Unity, SK; four brothers, Charlie (Shirley) Sehn of Maple Ridge, BC, John Sehn of Camrose, AB, Herman (Katie) Sehn of Keromeos, BC and Alex Duchscherer of Cranbrook, BC; brothers and sisters-in-law, Henry (Emma) Fuchs, Ed (Jenny) Fuchs, Molly (Oscar) Wenzel, Lydia (Art) Gagnon, Katie (Ted) Graff, Mike Kabatoff, Robert Wilson and Clarence Mayer. Regina was born on December 10th, 1923 to Edmund and Rose Sehn at Fox Valley. She married John Fuchs on November 11th, 1941 at Leader, Saskatchewan where she resided until John’s death on December 10th, 1981 when a few years later she moved to Medicine Hat to be closer to her daughter. Regina was a “Jack of All Crafts” from sewing, ceramics, tatting, porcelain doll making, quilting and the list goes on. She loved going for breakfast every Saturday morning with her family and having coffee with her friends at fast food places. Mom was the best cabbage roll maker and strudels were her trademark and were enjoyed by her family and their friends. She was strong in her faith and lived by that standard every day. Mom was the best mom, gramma and great gramma ever. She was noted for her love of jewelry and bling, so we ask if you could wear some “bling” to her funeral. Those wishing to pay their respects may do so at VICTORY LUTHERAN CHURCH, 2793 Southview Drive SE, on Monday, November 4th, 2013 from 10:00 until 10:55 a.m. The Funeral Service will be held in VICTORY LUTHERAN CHURCH, on Monday, November 4th, 2013 at 11:00 a.m. with Pastor Joe Leavengood and Diaconal Minister Lila de Waal co-officiating. Memorial gifts in Regina’s memory may be made to the Palliative Care Unit, Medicine Hat Regional Hospital, 666 – 5th Street SW, Medicine Hat, Alberta, T1A 4H6 or to the Victory Lutheran Church, Perpetual Memorial Fund, 2793 Southview Drive SE, Medicine Hat, Alberta, T1B 2H1. Condolences may be sent through www.saamis.com or www.gonebutnotforgotten.ca or to condolences@saamis.com subject heading Regina Fuchs. Radio funeral announcement can be heard on Friday around 12:35 p.m. on 93.7 Praise FM. Funeral arrangements are entrusted to SAAMIS MEMORIAL FUNERAL CHAPEL AND CREMATORIUM, “The Chapel in the Park”, locally owned and directed. Should you wish any additional information, please telephone (403)528-2599

Leave a Condolence for Pam Marchand