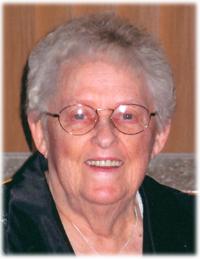 1932 ~ 2013
Margery Dupuis, beloved wife of the late Edward Dupuis, passed away peacefully at the Masterpiece River Ridge on Thursday, November 7, 2013, at the age of 80 years.  Margery’s memory will be cherished by her daughters, Susan (Kim) Robertson of Alsask, Saskatchewan and Denise (Rocky) Houff of Medicine Hat;  son, Larry (Phyllis) Sundstrom of Peachland, B.C.;  grandchildren, Taylor  Frank and Mike Sundstrom and Wes Sundstrom;  four great-grandchildren, Jake, Gabe, Ali and Rylan;  siblings, Roger and Jane as well as numerous extended family.  Margery was born December 10, 1932 in Shaunavon, Saskatchewan.  Throughout her life she moved several times, residing in various communities in British Columbia and Alberta.  She was very hospitable and operated numerous restaurants in her day.  When she wasn’t working, she loved to crochet in her spare time and made many unique items over the years.    Margery liked people and was a social butterfly.  She could talk to anyone and really enjoyed to sit down and have a beer with her friends.  Life changed when her husband, Edward passed away in 2005.  Now they are together again. Those wishing to pay their respects may do so beginning one hour prior to the Celebration of Margery’s life which will be held at Cook Southland Funeral Chapel, 901 – 13 Street S.W., Medicine Hat on Tuesday, November 12, 2013, at 3:00 p.m. with Reverend Barrett Scheske officiating.  (Condolences may be expressed by visiting www.cooksouthland.com)  Those wishing to remember Margery may do so through a donation to the Canadian Diabetes Association, 102, 73 – 7 Street S.E., Medicine Hat, Alberta, T1A 1J2.  Honoured to serve the family is COOK SOUTHLAND Funeral Chapel, 901 – 13 Street S.W., Medicine Hat, Alberta, T1A 4V4.  Telephone:  403-527-6455.

No Condolences for “MARGERY DUPUIS”