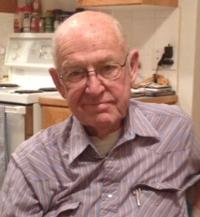 Abram “Abe” Giesbrecht, beloved husband of Mary Giesbrecht of Medicine Hat, passed away on Monday, December 2nd, 2013 at the age of 79 years. Abe also leaves to cherish his memory one son, Rob Giesbrecht (Deanna McBurnnie) of Medicine Hat; three grandchildren, Keegan, Dyneshia and Ledger, all of Medicine Hat; one brother, George (Vivian) Giesbrecht of Vernon, British Columbia; one sister, Margaret (Ed) Klassen of Armstrong, British Columbia; as well as numerous nieces and nephews. Abe was predeceased by his parents, Edmund and Anna Giesbrecht; and one brother, Benjamin Giesbrecht. Abe was born on September 9th, 1934 in Morris, Manitoba. It was in Morris that he married Mary Pylypiuk on September 26th, 1953. Abe loved being a pilot. He was an avid bridge player and loved spending his winters in the south with Mary. He had a love of knowledge and was forever learning new things. Abe will be dearly missed by all those who knew and loved him. A Private Family Time of Remembrance will be held. Memorial gifts in Abe’s memory may be made to the Margery E. Yuill Cancer Centre, c/o Medicine Hat Regional Hospital, 666 – 5th Street SW, Medicine Hat, Alberta, T1A 4H6. Condolences may be sent through www.saamis.com or to condolences@saamis.com subject heading Abe Giesbrecht. Funeral arrangements are entrusted to SAAMIS MEMORIAL FUNERAL CHAPEL AND CREMATORIUM, “The Chapel in the Park”, locally owned and directed. Should you wish any additional information, please telephone (403)528-2599