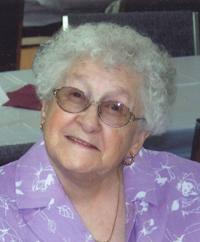 Mrs. Mary Lonson of Medicine Hat, beloved wife of the late Mr. Lloyd Lonson, passed away on Sunday, January 26th, 2014 at the age of 85 years. Mary leaves to cherish her memory her son, Larry Fischer; her daughter, Donna (Brian) Lesmeister; her chosen son, Bernard Le Prete; two step-sons, Don (Anne) Lonson and Gilbert (Dorothy) Lonson; her step-daughter, Faye Cain; numerous grandchildren, great-grandchildren, and great-great-grandchildren; one sister, Shirley Traxel; as well as many extended family. Mary was predeceased by her husband, Lloyd Lonson on August 16th, 1999; her parents, Gottlieb and Leontina Fregin; one son-in-law, Pat Cain; one daughter-in-law, Shirley Fischer; and one sister, Ella Metcalf (Lloyd). Those wishing to pay their respects may do so at SAAMIS MEMORIAL FUNERAL CHAPEL, #1 Dunmore Road SE, on Thursday from 7:00 to 9:00 p.m. At Mary’s Request, a Graveside Service will be held in SAAMIS PRAIRIE VIEW CEMETERY, 5160 Gershaw Drive SW, on Friday, January 31st, 2014 at 1:30 p.m. Memorial gifts in Mary’s memory may be made to the S.P.C.A., 55 Southwest Drive SW, Medicine Hat, Alberta, T1A 8E8. Condolences may be sent through www.saamis.com or to condolences@saamis.com subject heading Mary Lonson. Radio funeral announcement can be heard on Thursday around 11:45 p.m. on 93.7 Praise FM. Funeral arrangements are entrusted to SAAMIS MEMORIAL FUNERAL CHAPEL AND CREMATORIUM, “The Chapel in the Park”, locally owned and directed. Should you wish any additional information, please telephone (403)528-2599

Leave a Condolence for sandy swanson