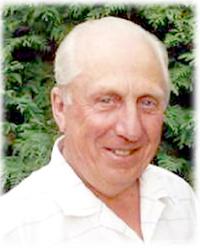 Clarence Thurston, beloved husband of Yvonne, passed away on Thursday, February 13, 2014, in Bow Island, Alberta, just shy of his 91st birthday.  He was born, February 25, 1923, in Bow Island, and has lived the majority of his life there.  He was married to Mary Yvonne Matchett on July 29, 1944, in Newcastle, NB.  They would have celebrated 70 years of marriage this year.  Along with his loving wife, Yvonne, Clarence is survived by his seven children and 23 grandchildren:  Wayne Thurston (Jodi, Tammi and Jamie); Pat (Jim Tratch) Thurston (Chris and Kerry); Ruth Bruins (Erin and Lauren); Rick (Wendy) Thurston (Jill, Ryan and Marty);  Kathy (Harv) Nixdorf (Cole, Brett, Cam, Craig and Cade); Margie (Rob) Rapson (Sarah, Diana, Samantha, Tessa and Philip) and Beth (Robert) Hopkins (Andrew, Jordan and Ethan).  He is also survived by 25 great-grandchildren;  a sister-in-law, Margaret Belcher, Brantford, ON. and sisters-in-law, Libby Bland, Ruth (Jim) Heath, Greta (Don) Curry, all of New Brunswick.   Clarence was predeceased by his parents, Fred and Edith Thurston and two brothers, Ron and Len Belcher.  Clarence received his schooling at Lansdell and Bow Island Schools, at Garbutt Business College in Medicine Hat, and at the University of Toronto.  He served for two and one half years in the military and farmed for over 45 years.  Clarence was passionate about his family, his church and his community.  He served locally, provincially, federally and internationally.  He will be remembered for his involvement in the development of rural electrification and telephone services;  in home and school, school board and college board;  as church finance officer, Sunday school teacher and superintendent; in the Alberta Wheat Pool, the Canadian Wheat Board, UFA, Co-op Implements; with the historical society and tourism committee for town of Bow Island and in facilitating the re-enactment of the North West Mounted Police Red Coat Trail.  When asked about his many volunteer activities, Clarence would say, “It is the price I pay for the space I occupy.”  He will be missed.  In accordance with Clarence’s wishes, cremation has taken place.  A memorial service celebrating his life will be held at the Bow Island Evangelical Free Church, 214 – 4 Avenue West, Bow Island, AB., on Saturday, February 22, 2014, at 1:00 p.m.  (Condolences may be expressed by visiting www.cooksouthland.com)  Flowers are gratefully declined.  Donations may be made in Clarence’s memory to the Bow Island & District Health Foundation, P.O. Bag 3990, Bow Island, AB., T0K 0G0.  Honoured to serve the family is Cook Southland Funeral Chapel, 901 – 13th Street S.W. Medicine Hat, Alberta T1A 4V4 Phone 403-527-6455

No Condolences for “CLARENCE FREDERICK THURSTON”