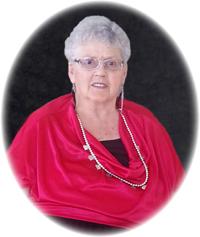 It is with great sadness that the family of Edith Hoffman announces her passing on Monday, January 6th, 2014 at the age of 79. “Edie” grew up in Medicine Hat, where she met her husband Bill, and was the youngest of 3 children of William and Florence Chapman. Bill and Edie were married on October 18, 1952 and lived in Medicine Hat until they moved to Olds in 1956. Edith’s family was very important to her and many weekend trips were spent on the highway back and forth to Medicine Hat. She was a right arm to Bill as he started the first Olds Co-op and could always be found baking various goodies for give always at the store or helping prepare food for every project Bill took on including Kiwanis Horse Shows and today’s ongoing Co-op Pancake Breakfast. Edith (Mrs. H) taught “Little Elves Nursery School” out of her home from 1967 – 1973 and thoroughly LOVED spending time with her morning and afternoon classes. Classroom activities, bus trips, hayrides, theme parties, TV appearances on Buckshot and Wynn’s Pad, as well as amazing graduation ceremonies (with Ron Barge “Buckshot” officiating) were just a few of the highlights over the years. This was not a job for Mrs. H, it was her passion and honor to spend time with her “kids” each week. Edith & Bill started up Ramlyn’s Shirt Hut in Olds in 1976 and enjoyed meeting and greeting the public daily until it’s closing in 1991. Edith and Bill did a lot of camping over the years and Edie could always be found drumming up some kind of activity for the kids to get involved in wherever she went. She made many special friends over the years and kept in touch with as many as possible. The last number of years was spent at Olds Extended Care where Edith continued to keep her sense of humor and commitment to socializing. Edie will be lovingly remembered by her 2 children Robynn (Brian) Hoschka, and Kevin Hoffman & Cynthia. Nana will also never be forgotten by her 2 grandchildren, Mitch (Jill) & Jessica (Micah) as well as her extended grandchildren Kaesha and Leo. Auntie Edith will be missed dearly by very special nieces Donna (Vern) Lyons and Rhonda Stafford as well as numerous nieces, nephews, relatives and friends. Edith was predeceased by her husband Bill 2012, mother Florence 1964, father William 1971, brother Clifford 1928, sister Muriel 1976, brother Ralph 2001 and niece Yvonne.
A Memorial Service will be held in Edith’s honor on February 22nd, 2014 at the Olds Air Cadets Hall at 11:00 am. (formerly the Rec. Centre, beside the Library) 5205 52 St., Olds, with Pastor Brent Reilly officiating. In lieu of flowers, memorial tributes may be made directly to the Alberta Heart & Stroke Foundation or the Olds Hospital Long Term Care. Heartland Funeral Services Ltd., Olds entrusted with arrangements. 403-507-8610 www.heartlandfuneralservices.com

No Condolences for “EDITH RAMONA HOFFMAN”