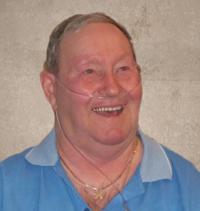 Mr. Douglas “Doug” Thomas Hallam, beloved husband of Mrs. Berniece Hallam of Redcliff, passed away on Sunday, March 16th, 2014 at the age of 68 years. Doug also leaves to cherish his memory two sons, Tommy Hallam and Garry Hallam and their families. Doug was born on April 30th, 1945 in Manitoba. He married Berniece on September 17th, 1993. They had an acreage in Peace River where he loved his hobby farm of goats, pigs and llamas. Doug and Berniece moved to Redcliff from Peace River 2 years ago. They enjoyed having coffee at Tim Horton`s in Redcliff, where they met many wonderful people. A Gathering for friends and family will be held in SAAMIS MEMORIAL FUNERAL CHAPEL, #1 Dunmore Road SE, on Thursday, March 20th, 2014 from 7:00 p.m. from 9:00 p.m. Memorial gifts in Doug’s memory may be made to the Save Old Souls Pet Rescue, P.O. Box 478, Redcliff, Alberta, T0J 2P0, or to the The Lung Association, National Office, 1750 Courtwood Crescent, Suite 300, Ottawa, ON, K2C 2B5. Condolences may be sent through www.saamis.com or to condolences@saamis.com subject heading Doug Hallam. Radio funeral announcement can be heard on Wednesday around 11:45 a.m. on 93.7 Praise FM. Funeral arrangements are entrusted to SAAMIS MEMORIAL FUNERAL CHAPEL CREMATORIUM & RECEPTION CENTRE, “The Chapel in the Park”, locally owned and directed. Should you wish any additional information, please telephone (403)528-2599