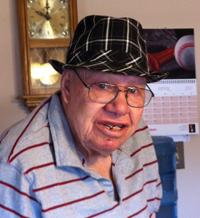 It is with heavy hearts we announce the passing of Joseph Nelson Larocque, fondly known as “Grumpa Joe” on March 11th, 2014. Joe was predeceased by his wife, Katharine and leaves to cherish his memory his “chosen” families – The Steele Family, Karen, Justin, Jordan, Regin, Korilyn and Jayda; The Christianson Family – Laverne, Ron, Darlene, Dale, Tina, Tyler, Ashley, Kieran, Jake, Paige, Tyson, Shelby, Troy, Cheyenne, Travis, Cory, Billi, Carson, Sydney; Kim, Brian and Mikaela Arseneault, Ada Materi, Bill, Cindy and Devon Woods, Wayne and Wanda Quallie, Dean, Kim, Brooke, Jaxson Quallie, Wanda and Claude Clarke, Natasha and Jason Hickey, Tracy Clarke, and his dogs Bella and Tika who he spoke very highly of. Those dogs were very special to Grumpa Joe. He also leaves family from Ontario; Katharine’s Family in Medicine Hat, and numerous friends. Joe was born on April 16th, 1924 in Ontario. He was a proud member of the Royal Canadian Legion, Elks, and the Knights of Columbus. Joe was an avid bingo player at Top Hat Bingo, a lover of card games although he sometimes was a “crib cheater”, and attended and volunteered at his church, Holy Family Parish. He developed a newfound love for “newfie” parties. Those wishing to pay their respects may do so at SAAMIS MEMORIAL FUNERAL CHAPEL, #1 Dunmore Road SE, on Friday from 9:30 to 10:25 a.m. The Funeral Service will be held in SAAMIS MEMORIAL FUNERAL CHAPEL on Friday, March 21st, 2014 at 10:30 a.m. with Father Philip Le officiating. Interment will follow in the Field of Honour at Hillside Cemetery. In lieu of flowers, donations in Joe’s memory may be made to the Medicine Hat Regional Hospital Palliative Care, 666 – 5th Street SW, Medicine Hat, Alberta, T1A 4H6. Condolences may be sent through www.saamis.com or to condolences@saamis.com subject heading Joseph Larocque. Radio funeral announcement can be heard on Thursday around 11:45 a.m. on 93.7 Praise FM. Funeral arrangements are entrusted to SAAMIS MEMORIAL FUNERAL CHAPEL CREMATORIUM & RECEPTION CENTRE, “The Chapel in the Park”, locally owned and directed. Should you wish any additional information, please telephone (403)528-2599