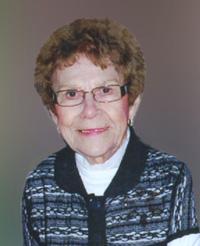 Odelia “Tillie” Hauck passed away peacefully in her sleep on Friday, March 21, 2014, at the age of 88 years, beloved wife of the late Kasmer Hauck. She leaves to cherish her memory her four children, Lorraine (Tom) Trombley of Redcliff, Gordon (Yvonne) Hauck of Calgary, Patty (Ken) Schindle of Medicine Hat and Tammy (Don) Moser of Fort Myers, Florida; six grandchildren, James (Gina) Trombley, Cherie (Gordon) MacKenzie, Joshua (Jerredi) Hauck, Travis Hauck, Tiffany Schindle and Amber Schindle; six great grandchildren, René and Danielle Trombley, Alexander, Rylan, Brook and Noah MacKenzie; three sisters, Aggie Berger, Cecile Besplug and Terry (Gerry) Plantz; three brothers, Adam (Emma) Fitterer, Peter (Josie) Fitterer and Johnny (Marlene) Fitter as well as numerous nieces and nephews. She was predeceased by her parents, Emmanuel and Margaret Fitterer; her sisters, Barbara, Anne and Pauline and her brothers, Fred, Emmanuel and Hank. Tillie was born on October 18, 1925 on a farm near Prelate, Saskatchewan, the oldest girl in a family of thirteen. She grew up near Prelate (Sandhills) and later moved to B.C. where she had a job picking fresh fruit. Tillie returned to Medicine Hat and worked at Medalta Potteries, Ogilvie Flour Mills and Dominion Glass. She met the love of her life, Kasmer Hauck and they were married on July 25, 1950. During their 53 years of marriage, they raised three daughters and one son. Tillie had a passion for travelling and dancing. She looked forward to her Saturday morning coffee outings with close friends Lila, Dorene and Darlene. Many special years were spent bowling with Olive, Lance, Julia, Hisa and her sister Aggie. Recently, Tillie resided in Chinook Village with her little big sister, Aggie, who was always there looking after her with tender loving care. Those who wish to pay their respects may do so at the PATTISON FUNERAL HOME on Wednesday from 6:00 – 7:00 p.m. and Thursday from 9:00 – 11:30 a.m. Family and friends will gather for prayers in the PATTISON CHAPEL on Wednesday evening at 7:00 p.m. The funeral mass will be celebrated in Holy Family Parish (1451 Strachan Road SE) on Thursday, March 27, 2014 at 1:00 p.m. with Fr. Matthew Emmelkamp celebrant. A private family interment will follow in the Hillside Cemetery. As an expression of sympathy donations may be made to the S.P.C.A. – 55 Southwest Drive SW, Medicine Hat, AB T1A 8E8. To e-mail an expression of sympathy, please direct it to: pattfh@telusplanet.net subject heading: Tillie Hauck, or you may visit www.pattisonfuneralhome.com and leave a message of condolence or you may visit www.gonebutnotforgotten.ca and leave a message of condolence. Funeral Arrangements are by the PATTISON FUNERAL HOME AND CREMATORIUM 540 South Railway St. SE, Medicine Hat T1A 4C2