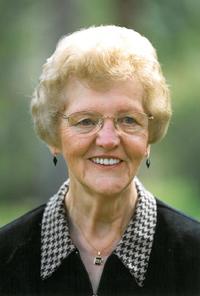 On March 23rd, 2014 Edna Treiber (nee Grusie) passed away peacefully at the age of 92. Her husband, Bert Treiber predeceased her in 2001 at the age of 92. Born at Burstall, Saskatchewan, Edna had 6 brothers and sisters. Her mother died when she was 2. One brother Art Grusie (age 101) of Calgary and one sister Mickey Treiber (age 91) of Medicine Hat survive Edna. Also, surviving are two sons and one daughter, Dennis (his wife Donna) Treiber of Kelowna, Doreen (her husband Walter) Gray of Kelowna and Russell (wife Gaile) Treiber of Pike Lake near Toronto. Also, all nine grand children – Brenda (Jerry) Geen, Dallas (Trish) Gray, Stuart (Kathy) Gray and Rodney (Krista) Gray of Kelowna. Also, Dennise (Lui) Aere, Escondido, California, Dor Ann (Grant) Russouw of Kelowna, David Treiber of Kelowna, Rhonda (Richard) Cosman and Shane Treiber of Toronto. Also surviving are 22 great grandchildren, 14 of whom live in Kelowna. Edna Treiber enjoyed good health throughout her life until recent years. She led a humble and happy life. The early years were spent on the farm in Burstall, Saskatchewan. When she married Bert July 15th, 1940 they moved to Schuler, Alberta where their three children were born. As Bert and Edna’s family got to early school years the Treiber’s moved into town (Medicine Hat) to be closer to education, activities and other family. In later years, once the kids were married, Bert and Edna moved to Salmon Arm after a short time in Revelstoke. Then to Kelowna in 1971. Edna sought part time employment as a seamstress at Lady Wear on Bernard. The classic case of turning a hobby into a part time career for a few years. In her youth, Edna was active in bowling and track and field. First prize at track meets was an ice cream cone. Edna won a lot of ice cream cones. After raising her children, doting over grand children and great grand children, her activities became even more focused on family. Edna enjoyed hockey, baseball and curling on TV. Due to hearing problems, which developed as she got older, TV viewing was more visual than audio. Our beloved Edna lived a rich but, modest life. She was frugal yet, very generous with family and friends. She made the most out of every moment. The predictable way in recent years to bring a smile to Edna’s face and joy to her heart was to have her family, especially the grand kids and great grand kids visit her at Mountain View Retirement Home on KLO Road, a place where the level of personal care gave her so much extra life and enjoyment. Her contented smile, love for family and wise counsel will always be remembered. The family wish to thank Doctor Lawrence Weibe and the staff at Mountain View Seniors Home and Orchard Manor at Hawthorn Park for the special care Edna received in recent years. A Memorial Service will be held at First Memorial Funeral Services, 1211 Sutherland Avenue, Kelowna on Saturday, March 29th, 2014 at 2:00 pm. In lieu of flowers donations to the Capri Rotary Club “Christmas Lights” program, PO Box 20188 RPO Towne Centre, Kelowna, BC V1Y 9H2. Condolences may be sent to the family by visiting www.mem.com. and searching her name under stories. Arrangements in care of First Memorial Funeral Services, (250) 762-2299.

One Condolence for “TREIBER”