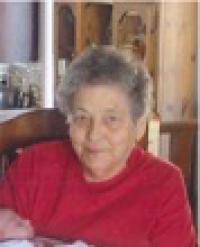 Ruby Verna Herman of Medicine Hat, beloved wife of the late Alvin Herman, passed away on Monday, May 5th, 2014 at the age of 78 years. Ruby leaves to cherish her memory, three sons, Wayne (Darlene), Garry, and Corey (Shiela), all of Medicine Hat; five grandchildren, Shashauna Meier (Todd Bumphrey), Carrie (Tyler) Paul, Ashley Herman (Nolan Chant), Nichole Herman, and Zachary Herman; four great-grandchildren, Kendra Horvath, John Paul, Sophia Paul, and Arlana Bumphrey; one brother, Walter; as well as numerous nieces and nephews. Ruby was predeceased by her husband, Alvin in 2002; two daughters, Sharon Meier and Debby Herman; and her parents, Cyrus and Augusta Bowers. Ruby loved spending time with her family, especially her grandchildren and great-grandchildren. She was a member of the Red Hat Bastarettes. Ruby will be deeply missed and forever remembered by all those who knew and loved her. Those wishing to pay their respects may do so at SAAMIS MEMORIAL FUNERAL CHAPEL, 1 Dunmore Road SE, on Saturday from 2:30 to 3:25 p.m. The Funeral Service will be held in SAAMIS MEMORIAL FUNERAL CHAPEL on Saturday, May 10th, 2014 at 3:30 p.m. with Pastor Joe Leavengood officiating. Interment will follow in the Family Plot at Hillside Cemetery. Memorial gifts in Ruby’s memory may be made to the Canadian Diabetes Association, #102, 73 – 7th Street SE, Medicine Hat, Alberta, T1A 1J2. Condolences may be sent through www.saamis.com or to condolences@saamis.com subject heading Ruby Herman. Radio funeral announcement can be heard on Friday around 11:45 a.m. on 93.7 Praise FM. Funeral arrangements entrusted to SAAMIS MEMORIAL FUNERAL CHAPEL CREMATORIUM & RECEPTION CENTRE, \”The Chapel in the Park\”, locally owned and directed. Should you wish any additional information, please telephone (403)528-2599