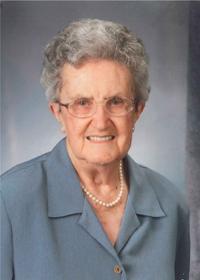 February 27th, 1922 to May 14th, 2014
Our dear Mother, Grandmother, and Oma passed peacefully from this life on Wednesday, May 14th, 2014 after a brief stay at Carmel (St. Joseph’s) Hospice. The last few weeks of her life showed the same pragmatic determination and quiet grace with which she lived her entire life.
She found life as a farm girl and wife challenging but rewarding. She had no regrets, excepting one which she shared. In her words, “I went to school for eight years and couldn’t continue to the next level because that school was 10 miles away. If the opportunity had been there I would have been a teacher (and a good one!). I decided that if I had children they would go for higher education if they wanted. They all fulfilled my dreams.” She instilled in her children a love of learning, a love of life, and the \”common sense gene\” which she had in abundance.
She is survived by four children, Peggy (Michael) Hansen, Dorothy (Marvin) Bender, both of Medicine Hat, Richard (Sherry) Krause of Calgary and Gordon (Sandy) Krause of Sioux Falls, South Dakota; grandchildren and great- grandchildren, Kevin (Anna) Hansen, Emily and Alec; Shauna (David) Krismer, Nian; Nicole (Vincent) Stein, Gavin and Avery; Carol-Lyn Retelbach; Laurel (Steve) Van Dam, Aidan, Megan and Joshua; Jodi (Bruce) MacKay, Norah and Noelle; Matthew (Christina) Krause, James and Hayden; Dan (Jordan) Krause, Jackson; Paul (Monaya) Krause, Annika, Ellis and Grant; Beth Krause; as well as sister, Rosie Scheifele; and numerous nieces and nephews.
Socializing and Volunteering played a large and important part of her life. She dedicated countless enjoyable hours to the Ladies Club in Hilda, the Post and Veiner Center in Medicine Hat in addition to the Ladies Aid and LWML at St. Paul Lutheran. The Wednesday coffee ladies were a cherished circle of friends who began meeting in the 1970s. As well she made many new friends after moving to the Chinook Village in 2004.
She was predeceased by her loving husband, Gustave Christian in September 2001; her parents, Alexander and Annetta (Dewald) Bauer; siblings, Fred (Irene) Bauer, Frieda (Louie) March, Martha (Reinhold) Krause, and Lilly (Jack) Leismeister; sister-in-law, Freda (Stan) Moore; brother-in-law, Otto Scheifele; and great-granddaughter, Sophia Stein.
She was baptised, confirmed and married at Zion Lutheran church near Hilda, Alberta. Her faith continued strong throughout her life and she thanked God for the many blessings He bestowed on her and hers.
The Funeral Service will be held in ST. PAUL LUTHERAN CHURCH, 515 Sprague Way SE, on Friday, May 23rd, 2014 at 1:00 p.m. with Reverend Ken Edel officiating. A Private Interment will follow in the Family Plot at Saamis Prairie View Cemetery. In lieu of flowers, memorial gifts in Melita’s memory may be made to the CNIB, #102, 520 – 2nd Street SE, Medicine Hat, Alberta, T1A 0C6, or to The Lutheran Hour, 660 Mason Ridge Centre, St. Louis, Missouri, 63141-8557, or to the Canadian Lutheran World Relief, 600 – 177 Lombard Avenue, Winnipeg, Manitoba, R3B 0W5. Condolences may be sent through www.saamis.com or to condolences@saamis.com subject heading Melita Krause. Radio funeral announcement can be heard on Thursday around 11:45 a.m. on 93.7 Praise FM. Funeral arrangements are entrusted to SAAMIS MEMORIAL FUNERAL CHAPEL CREMATORIUM & RECEPTION CENTRE, \”The Chapel in the Park\”, locally owned and directed. Should you wish any additional information, please telephone (403)528-2599

One Condolence for “MELITA KRAUSE”