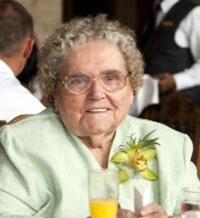 Mary Jangula, beloved wife of the late Peter Jangula of Medicine Hat, passed away on Thursday, May 22nd, 2014 at the age of 91 years. Mary leaves to cherish her memory three sons; Larry (Jeanette) Jangula of Courtney B.C., Jim Jangula of Medicine Hat, Joe (Jenelle) Jangula of Empress, one daughter; Brenda (Billie) Dauphinee of Kitimat B.C; eleven grandchildren; Angie Friesen (Rob Shakespeare), Todd Jangula, Craig Jangula, Nicole (Larry) Pawluk, Tanya (Travis) Reesor, Christopher Jangula, Lee Jangula (Leslie Aspland), Crystal (Earl) Fraser, Dawn Marie Dauphinee (Ron Pierre), Peter Dauphinee and Heather Dawn Jangula (Tyler Jessries), five great grandchildren; Justin Esterbrooks, Jennie Esterbrooks, Spencer Pawluk, Parker Fraser and Griffin Reesor; numerous nieces and nephews as well as all her adopted family that she graciously welcomed not only into her heart but to her home as she opened it up to everyone. Mary was preceded in death by her husband; Peter Jangula, one son; Jerome Jangula two daughter-in-laws; Virgina Jangula and Karen Jangula as well as two brothers and eight sisters. Mary was born March 7th, 1923 on the family farm near Liebenthal Saskatchewan. She was raised and educated in Medham area. On October 23rd, 1946 she married Peter and in 1952 they moved to a dairy farm north of Medicine Hat where the present Co-op is situated. In 1955 they relocated to a farm eight miles north of Empress and retired in 1977 to Medicine Hat. During her retirement Mary enjoyed gardening with Peter crocheting and playing cards. Those wishing to pay their respects may do so Monday May 26th, 2014 from 1:00- 4:00 p.m. and from 6:00- 9:00 p.m. at SAAMIS MEMORIAL CHAPEL, #1 Dunmore Rd SE Medicine Hat or on Tuesday from 12:00- 12:45 p.m. at HOLY FAMILY PARISH, 1451 Strachan Rd SE. The Vigil Rites (Prayers) will be held in SAAMIS MEMORIAL CHAPEL, #1 Dunmore Rd SE Medicine Hat on Monday May 26th, 2014, at 7:00 p.m. The funeral service will be held at HOLY FAMILY PARISH, 1451 Strachan Rd SE on Tuesday May 27th, 2014 at 1:00pm with Father Matthew Emmelkamp officiating. Interment will follow in the Family Plot at Hillside Cemetery. Memorial gifts in Mary’s memory may be made to the Canadian Cancer Society 102 – 1865 Dunmore Road SE Medicine Hat, Alberta T1A 1Z8 Condolences may be sent through www.saamis.com or to condolences@saamis.com subject heading Mary Jangula. Funeral arrangements are entrusted to SAAMIS MEMORIAL FUNERAL CHAPEL CREMATORIUM & RECEPTION CENTRE, \”The Chapel in the Park\”, locally owned and directed. Should you wish any additional information, please telephone (403)528-2599