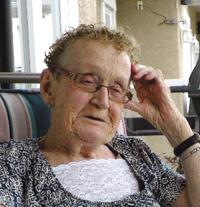 It is with great sadness we announce the passing of Mary Ola Bittorf (nee Cranley) on Tuesday, June 3rd, 2014 at the age of 85 years. Mary leaves to cherish her memory her children, Dennis (Sharon) Barry, Marilyn (Robert) Siegmund, Marlene (Rick) Powers and Rita Sidorak, all of Medicine Hat; numerous grandchildren and great- grandchildren; her stepsons, Warren (Jane) Bittorf and Robin (Sharon) Bittorf; one brother-in-law, Ralph Watt in Ontario; as well as numerous nieces and nephews. Mary was predeceased by her husbands, Joe Barry (1984) and Ralph Bittorf (1999); her stepson and his wife, Ean and Betty Bittorf; one sister, Helen Watt (2004); one brother, Vince Cranley; and one sister-in-law, Rita Pettey. Mary was born in Peterborough, Ontario and grew up in the area. She moved to Calgary in the early 1960’s and lived there for many years. She also lived in Sylvan Lake and Brooks for several years before finally settling in Medicine Hat. A Funeral Service honouring Mary’s life will be held at SAAMIS MEMORIAL FUNERAL CHAPEL, 1 Dunmore Road SE, on Monday, June 9th, 2014 at 11:00 a.m. with Pastor Art Hildebrand officiating. Interment will take place in the Family Plot at Saamis Prairie View Cemetery. Memorial gifts in Mary\’s memory may be made to the Alberta Heart & Stroke Foundation, #124, 430 – 6th Avenue SE, Medicine Hat, Alberta, T1A 2S8, or to the SPCA, 55 Southwest Drive SW, Medicine Hat, Alberta, T1A 8E8, or to the Cypress View Foundation, 722 Bassett Crescent NW, Medicine Hat, Alberta, T1A 7W8. Condolences may be sent through www.saamis.com or to condolences@saamis.com subject heading Mary Bittorf. Funeral arrangements are entrusted to SAAMIS MEMORIAL FUNERAL CHAPEL CREMATORIUM & RECEPTION CENTRE, \”The Chapel in the Park\”, locally owned and directed. Should you wish any additional information, please telephone (403)528-2599

Leave a Condolence for Monica Murray