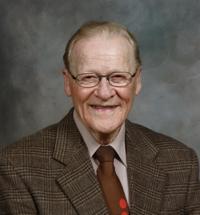 The family of Dr. Al Soklofske is saddened by his passing on Sunday, June 1st, 2014 at the age of 96 years. Al was born on February 7th, 1918 in Burstall, Saskatchewan to parents Gotfried and Katy (nee May). He was raised on the farm with his 5 brothers and sisters during the difficult economic times of the depression era. Hard work instilled a lasting work ethic, combined with a loving family environment to create an unforgettable character. He managed to complete his elementary education in Burstall before the family moved to Medicine Hat in 1935. He completed his education with graduation from Alexandra High School. Following this he attended college in Lacombe, Alberta earning a good portion of the tuition by milking cows and doing chores on the college farm. Al joined the RCAF in 1941, serving the war effort in England as a radar technician. It was while stationed in Cornwall that he met his future wife Josephine (nee Trezise) and they married on August 13th, 1945. Following return to Canada, they settled in Edmonton where Al enrolled in Dentistry at the University of Alberta graduating in 1950. His dental practice spanned nearly 50 years before reluctantly retiring at age 80. Al was active in the community in many organizations including the Masonic Lodge and Shrine Club where he played trumpet in the colorful marching band. He also joined Kiwanis and other service clubs over the years. He was a devoted member of the Seventh Day Adventist Church and supported many church and other charities. Belief in God and a hereafter was a source of strength in his life. He is survived by his loving wife of 68 years Josephine; brother, Harold of Calgary; and sister, Rosella Dawson of Edmonton; two children, Diane of Winnipeg and Barry (Debbie) of Medicine Hat; grandsons, Jason (Kelsi), Steven and Neil; and 1 great granddaughter, Madelyn; as well as numerous nieces and nephews. He was predeceased by his parents; stepmother, Katherine Dederer; brothers, Paul and Jon; and sister, Jane (Agan). He will be greatly missed by his family, friends, former patients and church members. To honour his wishes a private graveside service will be held at Hillside Cemetery. Memorial gifts in Albert\’s memory may be made to Alberta Heart and Stroke Foundation, 124, 430 – 6th Avenue SE, Medicine Hat, Alberta, T1A 2S8 or to the Shriner\’s Crippled Children\’s Hospital, 5225 – 101 Street NW, Calgary, Alberta, T3L 1S4 or to the charity of one\’s choice. Condolences may be sent through www.saamis.com or to condolences@saamis.com subject heading Albert Soklofske. Funeral arrangements are entrusted to SAAMIS MEMORIAL FUNERAL CHAPEL CREMATORIUM & RECEPTION CENTRE, \”The Chapel in the Park\”, locally owned and directed. Should you wish any additional information, please telephone (403)528-2599

Leave a Condolence for Peggy Kretz