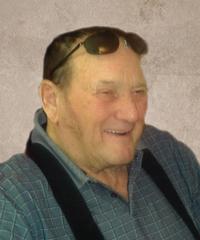 Mr. James \”Jim\” Wilfred Rath, beloved husband and soulmate of Mrs. Inez Rath of Medicine Hat, passed away on Sunday, July 6th, 2014 at the age of 79 years. Jim also leaves to cherish his memory his children, Rocky, Gene and Carrie; son-in-law, Dean; grandchildren, Darnyll (Lance) and Shareen; great grandson, Ethan (aka little stinker); sister, Winny; sisters-in-law, Jane (Ralph) and Irene (Balzar); and beloved pets, Daisy and Mark. Jim is also remembered by his numerous nieces, nephews and many relatives and friends. Jim was predeceased by his parents, Fred and Emily; step-mother, Tillie; daughter, Charlene; son-in-law, Farley; one brother, Dixon; and parents-in-law, Phillip and Annie. Jim was born in Medicine Hat on September 15, 1934. In his younger years he was involved with the Rodeo with broncs and bulls. From an early age he was involved in farming; while also driving school bus for many years in Irvine. He retired from farming to Medicine Hat in 1972 where he drove gas truck to surrounding area farmers until his retirement in 2002. Jim enjoyed fishing, camping, gardening and tinkering and fixing items. He was always joking, telling stories—fact or fiction—of long ago. His most pleasurable times were spent surrounded by his family and friends. A private graveside service will be held at Saamis Prairie View Cemetery. You are invited to a Come and Go Celebration to be held at Chinook Village, Garden Lounge, 2801 – 13th Avenue SE, on Thursday, July 10, 2014 from 7:00 until 9:00 p.m. In lieu of flowers, memorial gifts in Jim\’s memory may be made to Kidney Foundation of Canada, 6007 – 1A Street SW, Calgary, Alberta, T2H 0G5. Condolences may be sent through www.saamis.com or to condolences@saamis.com subject heading Jim Rath. Funeral arrangements are entrusted to SAAMIS MEMORIAL FUNERAL CHAPEL CREMATORIUM & RECEPTION CENTRE, \”The Chapel in the Park\”, locally owned and directed. Should you wish any additional information, please telephone (403)528-2599

Leave a Condolence for peggy wingenbach