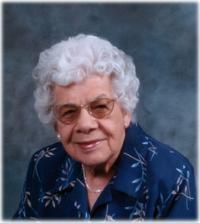 1918 – 2014
Pauline Gwendoline Linnell passed away at South Country Village on Thursday, July 24, 2014 at the age of 95 years. She leaves to cherish her memory her son, Morris (Buryl) of Medicine Hat; one sister, Carel James of Vancouver; granddaughter, Charlene and her daughter, Eartha of White Rock, B.C.; grandson, Darren and his son, Camilo of Salt Spring Island, B.C.  Pauline was predeceased by her parents; her husband, Hector and her brother and sister-in-law, Art and Mimi James.  Pauline and Hector were married on July 1, 1941 in Vancouver where Hector took leave from the Imperial Bank of Canada (later to become CIBC) to join the war effort.  After the war ended and in a series of moves, CIBC transferred  the couple to Sangudo, AB; Prince Albert and Bengough, SK, then finally to Lac La Biche, AB.  Their retirement years were spent in Kelowna, B.C.  During these many moves Pauline made life-long friends and took an interest in each community through volunteer work. Cremation has taken place and she will be laid to rest in Vancouver at a later date.  If friends so desire, memorial donations may be made to Halo Air Ambulance, 12, 49 Viscount Avenue S.W., Medicine Hat, AB., T1A?5G4.  (Condolences may be expressed by visiting www.cooksouthland.com)  Honoured to serve the family is COOK SOUTHLAND Funeral Chapel, 901 – 13 Street S.W., Medicine Hat, Alberta, T1A 4V4.  Telephone:  403-527-6455.

One Condolence for “PAULINE G. LINNELL”