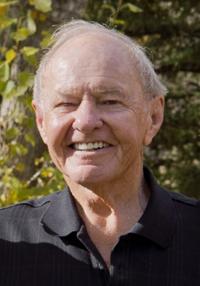 Mr. Laverne Cicel Wombold of Calgary, beloved husband of Doreen, passed away in Strathmore on Sunday, August 3rd, 2014 at the age of 72 years. Born on November 12th,1941 in Olds, Laverne received his education in Duchess. He married Doreen Beverly Allen on October 12th, 1963 in Calgary and together they resided in Sedalia, Bindloss, Brooks, Medicine Hat and most recently Calgary. Laverne worked for Dowell Oil Company, Canadian Export Gas and Ocelot Energy.  Laverne and a long time friend Wayne Klatt owned and operated Alberta Plug Systems which they successfully ran for several years. Laverne was Past President and Lifetime Member of the Medicine Hat Oil Men\’s Association and 35 year member of the Moose. Laverne enjoyed being with his family telling stories and jokes and making meals for them, he was the BBQ extraordinaire and sausage maker of all. He also enjoyed being in the kitchen with mom making noodles, lefsa and crout buns. Once the snow hit the ground they would pack up their vehicle and drive to their home in Arizona. He will be best remembered as a kind, caring and giving man, always willing to lend a helping hand. Laverne was predeceased by his parents Fred and Lena Wombold and his father and mother-in-law Everett and Annie Allen. He is survived by his loving wife Doreen of 50 years; daughters Cheryl Guillet and her husband Keith and Kim Dowler and her husband Dan; grandchildren, Brittney (Aaron), Brennen, Katina, Kayla, Tyson, Lance and Kyle; great grandchildren Aidan and soon to be baby girl Leipert. Funeral services will be held on Friday, August 8th at 1:00 PM from Smith Memorial Chapel. Rev. John Theiss officiating. In memory of Laverne, if friends desire, memorial tributes may be made to Tom Baker Cancer Centre, 1331 – 29th Street NW, Calgary, Alberta   T2N 4N2. Funeral arrangements in care of SMITH FUNERAL HOME, BROOKS, ALBERTA. Condolences may be forwarded through   www.sfh.ca   Telephone 403-362-4636 or Toll Free (866) 362-4652.

One Condolence for “WOMBOLD”